There are few things more sociologically interesting than a big scandal. I’m not talking about the scandals themselves; the behavior in question is never actually shocking. In fact, considering the Britney craze, and now John Edwards, they’re another thing entirely.

This is a conflict between Edwards and his wife, amplified by all the other folks who disapprove of his behavior. So he does something you don’t like. Politicians constantly do stuff I don’t like. In this case, at least it wasn’t any of my tax dollars misspent. 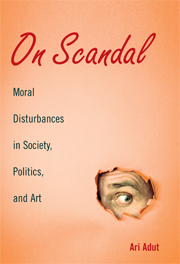 Ari Adut studies scandals. He’s a sociologist at the University of Texas, Austin.

On Scandal cracks these trends open wider than my musings can.

For a really good cross-section of popular attitudes, though, check out the comments section of Maureen Dowd’s column about John Edwards. Hundreds chime in, and opinions are all over the map.

To sum up many of them, here’s a representative example:

Absolutely agree with everything you wrote. There is a pathetic insincerity to Edward’s “preening apology” that makes me want to gag. And what does it really matter that he did it when his wife’s cancer was in remission? As if that is somehow supposed to makes it (and the public) more accepting. Get real!!”

Another important dimension is reflected in Elizabeth Edwards’ own blog post about the whole ordeal. Not surprisingly, she just wants everyone to shut up and leave her alone.