David Friedman on the Libertarian Party

From Flynn’s ordered-government liberalism, we turn to Future Imperfect author and hard-core libertarian David D. Friedman for his views on a very visible political party that doesn’t always make traction in the polls, but could this year. Why the change? A bridge in ideology may be the reason.

From his blog, Ideas

Two Paths for the Libertarian Party 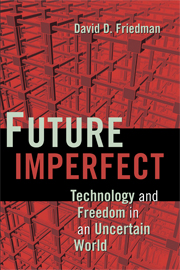 “Libertarian,” in the modern American context, describes a range of political views. It includes hard core libertarians who would like to reduce the size and scope of government to something between a minimal state and no state at all. It also includes the much larger number of Americans–polls suggest ten to fifteen percent of the electorate–who favor substantial, but not radical, reductions in government involvement in both economic and social matters. A libertarian in the second sense is probably in favor of legalizing medical marijuana, might well be in favor of decriminalizing marijuana use, is probably not in favor of complete drug legalization. He is likely to view education vouchers favorably, is probably opposed to national health insurance and may support some privatization of social security, but is unlikely to take seriously proposals for a fully private system of schools, health care, or old age insurance.

The Libertarian Party is mostly made up of hard core libertarians. Its campaign strategy has been to spread their views, to appeal to those who share them, while hoping for some votes from soft core libertarians who see voting for it as a way of pressuring the major parties to shift in a libertarian direction.

This year is going to be different. Bob Barr, the LP’s presidential candidate, is an ex-Republican congressman whose past (and, arguably, present) views are no more than moderately libertarian. He supports the legalization of medical marijuana but allows interviewers to assume without contradiction that he opposes more general marijuana legalization. He limits his opposition to the War on Drugs to opposing federal involvement–which, given that the War on Drugs is mostly conducted on the state and local level, is very nearly an irrelevancy masquerading as policy. Judging by what I have seen of him, his version of libertarianism will correspond, at best, to the views of the libertarian wing of the Republican party.

An optimistic view of this year’s strategy is that it will finally get the LP a significant number of votes. Currently Barr is polling at about 6%, roughly twelve times the best electoral outcome the party has ever achieved in a presidential election. Some of those are doubtless Republicans, both libertarians and fiscal conservatives, who feel this year that their party has abandoned them. But many others may be Republicans, Democrats and Independents who are libertarian in the moderate sense and have in the past been repelled by the LP’s more extreme version. If Barr actually ends up with five to ten percent of the votes that will put pressure on both major parties to modify their positions at least a little in a libertarian direction, which is surely a good thing.

A pessimistic view of the current strategy is, first, that it won’t work–that the vote totals will not match the polling totals–and second that, to the extent it does work, it will send the wrong message. The positions that Barr is likely to push, after all, are already held by quite a lot of people in the major parties. A few years ago, I suggested to a local Democratic congresswoman that one way in which her party could pull libertarian voters out of the Republican party was by coming out in favor of a federal policy of respecting state medical marijuana laws. She replied that she and some colleagues had already introduced such a bill.

Seen from this standpoint, Barr’s candidacy seems chiefly designed to push the Republican party back towards something more like its pre-Bush position as a coalition containing, but not dominated by, libertarian elements. It may also strengthen the position of the more libertarian elements in the Democratic party. But it is unlikely either to spread libertarian ideas in any strong sense or to encourage the major parties to consider more than minor adjustments in their policy positions.

The poster child for the more radical strategy is the Socialist Party of the first half of the 20th century. It won almost no elections, in part because it supported extreme positions. But most of those positions were eventually adopted, and implemented, by the major parties.

I have no confidence in my abilities as a political prophet, so am reluctant to predict which strategy will work better. As an individual voter, however, knowing that a single vote has no appreciable effect on the outcome of a national election, I regard voting as a symbolic act. Being myself a hard core libertarian, I am disinclined to vote for a Libertarian candidate who is, so far as I can see, no more libertarian than the better Republicans.

It looks as though I get to sit out this election.

About the Author: David D. Friedman

David Friedman is author of Future Imperfect: Technology and Freedom in an Uncertain World (2011). He is a leading figure in the anarcho-capitalist community and is Professor of Law at Santa Clara University, California....