Back to the Future, with Barack Obama

Barack Obama is now the repository of the hopes and dreams of all those cosmopolitans and sophisticates who still see Iraq as a disastrous mistake, the war on terror as a fiction, and a return to the Bill Clinton years of supposed ‘peace and prosperity’ as seven years overdue. But these expectations are already so high that, assuming the Illinois neophyte wins in November, a strong element of buyer’s remorse is almost inevitable in 2009, for three reasons. 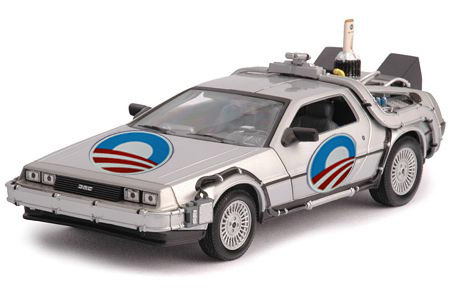 Firstly, if Obama does make it to the Oval Office, it will not be as a McGovernite ‘bring the troops home’ candidate but as a ‘hard power’ Democrat. As it has since 1972, national security remains the reliably painful Achilles heel of Democratic presidential aspirants. Obama’s platform thus far, such as it is, promises not to abandon the war on terror but to rebrand and wage it more effectively. His main rationale for getting US forces out of Iraq is not to turn their swords into ploughshares at home but to redeploy them to Afghanistan. Obama has committed to using US forces in the border states of Pakistan against al Qaeda if Islamabad refused to do so. Notwithstanding the unforeseeable threats that will arise after 2009, an Obama presidency will not see the end of action for the US Marines, Predator drones or special forces.

Second, while it is true that Obama has stressed restoring US alliances, America’s standing in the world, and dealing directly with Washington’s enemies, precisely how he intends to achieve all this remains enduringly opaque. In fact, if he truly follows through on some of his promises, he risks worsening, not improving, foreign relations. An America that takes an insular, protectionist turn is hardly likely to win plaudits in foreign capitals facing a global economic downturn. An administration that makes more, not less, demands on its erstwhile allies for committing NATO forces to theatre and for stumping up more resources to fund and fuel them may not yield heartfelt votes of thanks in Brussels and Bonn. An administration whose UN Ambassador does not publicly and privately deride the organization’s utility will no doubt be more welcome in New York. But the failings of the Security Council – from Darfur to Iran to Zimbabwe to Burma – will require more than elegant phrases and soaring rhetoric to remedy.

Third, the urgency of some problems will be greater than ever over 2009-13, not least the Iranian quest for nuclear weapons and the steadily worsening Middle East cauldron. Progressives currently celebrate Obama’s ‘no preconditions’ position on diplomacy with Tehran, Damascus, Pyongyang, Caracas and Havana. But the talking – whether by the E3 (the UK, France and Germany) with Tehran or the six-party talks with North Korea – has been proceeding apace for years, to no material results. Obama has singularly failed to state what the US intends to offer that will alter the existing strategic calculation of the Mullahs. If the regime genuinely wished to bargain away its nuclear aspirations in return for full diplomatic relations, increased trade and closer ties with the US, would it not have done so already? The regime’s interest is not in domestic prosperity, regional stability or peace – it is instability in its neighbourhood than serves its perpetuation in power.

In the midst of a highly personalised presidential campaign, in which both candidates inevitably promise more than either can deliver, a modest degree of scepticism about the future is judicious. We are undoubtedly at the beginning of the end of the Bush presidency. But we are arguably also at the end of the beginning of a struggle that Presidents McCain or Obama will perforce be obliged to continue. The result of that is likely to be an echo of the Truman precedent. Just as Ike derided Truman’s legacy of containment as immoral and promised ‘rollback’ of communism, only to embrace and extend containment in office, so Obama is likely to maintain and finesse, not repudiate, Bush’s core grand strategy. The irony is that Bush’s third term is as likely to be that of President Obama as much as a President McCain.

About the Author: Robert S. Singh

After Obama is Robert Singh's tenth book, his second on Obama's foreign policy, and follows books on the Bush Doctrine, Governing America, The Congressional Black Caucus and The Farrakhan Phenomenon. His previous co-authored book for Cambridge, After Bush, won the 2009 Richard E. Neustadt Prize of the American Politics Group of the UK for the best ...

About the Author: Timothy J. Lynch

Timothy Lynch is the co-author of After Bush: The Case for Continuity in American Foreign Policy (2008) and author of Turf War: The Clinton Administration and Northern Ireland (Ashgate Pub Ltd 2004). Lynch is Senior...