Darwin on the Isle of Wight 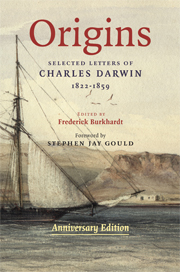 This week in Darwin’s correspondence: June 18, 1858, 150 years ago — Darwin writes to Charles Lyell from the Isle of Wight, a little island 3 miles from the South coast of England. This letter comes from Cambridge University’s Darwin Correspondence Project.

This was no vacation. On June 18, already ill his eldest daughter, Henrietta, came down with diptheria. Several days later, Charles Waring Darwin, his 18-month old son suffered from scarlet fever, dying a few days after that. The scarlet fever outbreak was sweeping Darwin’s village, and they escaped to the Isle of Wight until it ran its course.

Darwin contemplates writing an abstract of his work so far, but realizes that it’ll take a larger volume. The resulting book, we know as The Origin of Species by Means of Natural Selection: Or, the Preservation of Favored Races in the Struggle for Life.

I write merely to thank you for the abstract of the Etna paper.f1 It seems to me a very grand contribution to our volcanic knowlede. Certainly I never expected to see E. de B. theory of slopes so completely upset.f2 He must have picked out favourable cases for measurement. And such an array of facts he gives!— You have scotched & will see die, I now think, the Crater of Elevation Theory. But what vitality there is in a plausible theory!

We are established here for ten days & then go on to Shanklin which seems more amusing to one, like myself, who cannot walk— We hope much that the sea may do Etty & Lenny good. And if it does our expedition will answer, but not otherwise.

I have never half thanked you for all the extraordinary trouble & kindness you showed me about Wallace’s affair. Hooker told me what was done at Linn. Socy & I am far more than satisifed;f3 & I do not think that Wallace can think my conduct unfair, in allowing you & Hooker to do whatever you thought fair.

I certainly was a little annoyed to lose all priority, but had resigned myself to my fate. I am going to prepare a longer abstract; but it is really impossible to do justice to the subject, except by giving the facts on which each conclusion is grounded & that will of course be absolutely impossible.

Your name & Hooker’s name appearing as in anyway the least interested in my work, will, I am certain have the most important bearing in leading people to consider the subject without prejudice.— I look at this as so very important that I am almost glad of Wallace’s paper for having led to this.

My dear Lyell | Yours most gratefully | Ch. Darwin

We’ll be doing a Darwin letter every Friday. Why? The Darwin Correspondence Project at Cambridge University has been publishing Darwin’s letters for years in a massive, multi-volume set. As Darwin’s 200th birthday (and the 150th anniversary of Origin) approaches, look for a host of new publications, including collections of letters like Origins (1822-1859), Evolution (1860-1870), and Charles Darwin: The Beagle Letters.