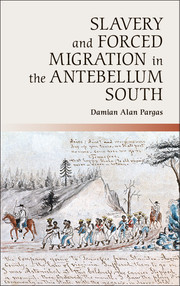 Damian Alan Pargas is author of Slavery and Forced Migration in the Antebellum South (2015). He is an associate professor of social and economic history at Leiden University. Specializing in North American slavery, he is the author of The Quarters and the Fields: Slave Families in the Non-Cotton South (2010) as well as numerous academic articles for journals such as Slavery & Abolition, the Journal of Family History, the Journal of Early American History, and American Nineteenth Century History. In 2011, he was granted a prestigious three-year Veni postdoctoral fellowship from the Dutch Council for Scientific Research (NWO) and a visiting research fellowship from the John F. Kennedy Institute for North American Studies at the Freie Universität of Berlin. Pargas is also an editor for the journal Itinerario: Journal of European Expansion and Globlisation and the secretary of the Netherlands Association for American Studies.