Written by: Anna A. Berman 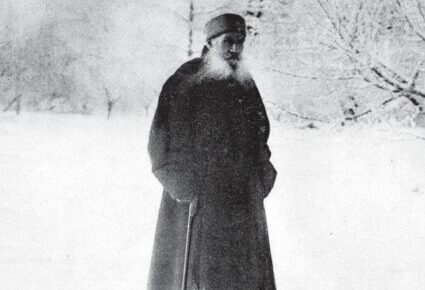 When the COVID-19 pandemic brought normal life to a halt in 2020, thousands of people around the globe began reading Lev Tolstoy’s War and Peace. Virtual reading groups, forums, and op-eds peppered the web. While many people cited the enormous length of the novel as a reason to read it during lockdown (when else?), the book had an uncanny ability to speak to the historical moment. Tolstoy wrote about the War of 1812, another cataclysmic time when normal life came to a halt as Napoleon’s army swept across Europe and invaded Russia. One of the central questions War and Peace wrestles with is the individual’s place in the broad canvas of history: how do our quotidian actions and cares relate to the monumental narrative that is unfolding on a world-historical scale? This is a question I was asking myself in the spring of 2020, albeit in a very different context. Isolated in my apartment, venturing out only for solitary walks and essential grocery runs, I felt cut off from the stories I was reading about brave doctors, nurses, and care home workers—the front-line fighters who were putting their lives on the line to save others. But Tolstoy had a message for the millions of us at home on the sidelines: we were shaping history too.

Tolstoy argues in War and Peace that it is not the “great men” who determine the course of history, but the aggregate of all the tiny choices made by all the insignificant people who recorded history forgets. “The willingness or unwillingness of one French corporal to enlist for a second tour of duty” is as important a cause of the war as any of the orders Napoleon gave, Tolstoy tells us, because “if [the French corporal] had been unwilling to serve, and another had been unwilling, and a third, and a thousandth corporal and solider there would have been so many less men in Napoleon’s army, and there could have been no war.” Taken together, all of us who avoided contacts (or, conversely, who went out partying) were helping to determine the course the pandemic would take. Readers who turned to War and Peace in 2020 drew many different parallels between the novel and their own lives, depending on their context.  Some focused on the role of leaders, others on the experience of loss and grief, the possibility of national or international solidarity, or the ways people are able to discover joy even in times of trauma.  As a professor of Russian literature who reads War and Peace roughly every two years, I was heartened to see so many people finding wisdom and solace in Tolstoy.

Heartened, but not surprised. In my own life I have long found that Tolstoy has insights for every context because he was unafraid to ask the fundamental questions—what must I do? and how must I live?—and he was attentive to all aspects of the world around him and within him that would help to provide answers. When I was isolating in 2020, I had just begun editing Tolstoy in Context.  It is a book with an impossibly ambitious task: to introduce readers to all the major contexts that influenced Tolstoy’s art and thought and to those areas where he, in turn, made an impact. From our various solitary perches around the globe, thirty-eight contributors came together to produce this volume: from Tolstoy experts to art historians, musicologists, historians of science, political theorists, scholars of the Doukhobors, religious historians, and many others.  The thirty-nine short chapters they produced cover a range of topics from big historical concerns like politics, war and the military, natural science, and the Woman Question; to the arts, music, and literature; to the international—Tolstoy’s relationship to India, America, and various world religions; to more intimate contexts like the family and estate culture Tolstoy grew up in, or nineteenth-century Russian dress-culture. The final section of the book focuses on the contexts in which we engage Tolstoy today, what might be called his “afterlife”: music and film adaptations of his works, biographies, and artworks that take Tolstoy himself as the subject and thus help to shape his legacy.

As the pandemic recedes and we return to normal life, it can feel like the very idea of normal has come to embrace elements of the catastrophic. Political, military, and ecological crises are now everyday events affecting all corners of the globe.  It is my hope that Tolstoy in Context will help more readers to access Tolstoy’s wisdom so that it will be of use to them in whatever new contexts we may find ourselves.

About the Author: Anna A. Berman

Anna A. Berman is a lecturer in Slavonic Studies at Cambridge University and a fellow of Clare College. Her research focuses on the nineteenth-century Russian and English novel and issues of kinship and family. She is the author of Siblings in Tolstoy and Dostoevsky: The Path to Universal Brotherhood (2015) and has also published articles on Tolsto...