Long COVID as a Case Study for Race/Disability Intersectionality 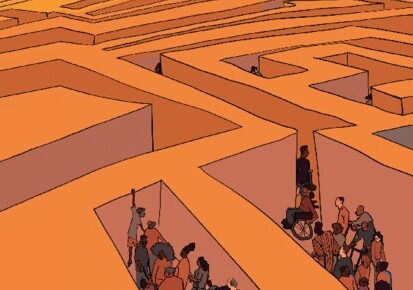 Chimére Smith is one of tens of millions of Americans with symptoms of long COVID. According to an August 2022 NBC News story, the 40-year-old Black woman from Baltimore was experiencing extreme fatigue, diarrhea, brain fog, and loss of vision in one eye, along with other symptoms. The symptoms were debilitating, preventing Smith from working and driving. But, according to Smith, on the numerous times she sought care at hospitals, her concerns were dismissed. One doctor called her “aggressive” when Smith insisted her symptoms were linked to her earlier bout with COVID.

Chimére Smith’s story echoes similar stories about Black patients in the US seeking testing or treatment for COVID itself, only to be ignored by health care providers or receive cursory care. Hearing Smith’s story reminded me of the experience of Dr. Susan Moore, a Black physician hospitalized with COVID. In December 2020, she recorded a video on Facebook from her hospital bed, describing how the doctor treating her would not provide the treatment that she – as a physician – believed that she needed and instead sought to discharge her, even though Moore believed she was not stable enough to return home. When media picked up the story, the hospital’s CEO described Moore as a “complex patient” and suggested that nurses “may have been intimidated” by her requests for appropriate care. Accounts of Black COVID patients with less medical sophistication for whom care was delayed or prematurely stopped cropped up repeatedly.

So perhaps Chimére Smith’s experience of having her concerns dismissed should not be surprising. The NBC News story focused on how Black long COVID patients who “felt invisible to the health care system” ended up forming their own support groups. Other outlets have reported on concerns that long COVID will produce a new chapter in the history of racial health disparities in the US.  Demographic data regarding long COVID’s prevalence in different groups remain limited, but it will not be surprising if we learn that the condition’s burdens are felt disproportionately by those groups, including racial and ethnic minorities, who have experienced high rates of COVID infection. Much of this reporting suggests steps to address barriers to accessing treatment for long COVID and to ensure that so-called long haulers can receive social and financial supports.

Implementing forward-looking interventions may help mitigate disparities as people of color deal with effects of long COVID. Simply looking ahead, however, is not enough to fully appreciate and address long COVID’s looming inequity. The over-representation of minorities among COVID patients was itself the product of inequitable social structures and health care system inequities.

The COVID-19 pandemic has become a “mass-disabling event,” comparable to polio, HIV, and World War II.  Having been over-represented among COVID patients, people of color could disproportionately experience the disability associated with long COVID. Given its genesis in unjust social and medical circumstances, many cases of long COVID may be characterized as an “emergent disability.” As described in my book, Embodied Injustice: Race, Disability, and Health, scholars coined this term to describe the growing number of people who become disabled in communities experiencing poverty or disadvantage. Examples are easy to identify: The children in Flint, Michigan who acquired learning disabilities after being exposed to lead in their drinking water. The Black Americans with diabetes who disproportionately lose limbs to amputation, often because they faced barriers to accessing care to diagnose and manage the disease. The victims of gun violence living in communities of concentrated poverty, where systematic disinvestment has largely eliminated opportunity and left illegal activity to fill the void. Less vivid examples exist as well. One study found that non-Hispanic Black adults in the US generally had a prevalence of physical disability equivalent to non-Hispanic White adults who were ten years older. This accelerated disablement is consistent with sociologist Arline Geronimus’s “weathering” hypothesis that the accumulation of stressors, insults, and adversity associated with being a Black woman in the US contributes to more rapid aging of that group.

Higher rates of COVID infection among Black and Brown Americans are widely acknowledged to be the product of social and economic factors. These include the greater likelihood that a person of color was an “essential worker” with a job that required exposure to the public, and the heavier reliance on public transportation (with associated viral exposure) to get to those jobs. Workplaces staffed predominantly by people of color, like meat-packing plants and nursing homes, had some of the highest rates of infection, often due to a lack of adequate protective measures. Other examples could be given. Scholars have explained how structural racism contributed to these conditions. Cases of disabling long COVID experienced by this group would be yet another example of emergent disability.

Long COVID presents the potential for significant growth in the disabled population, with many newly disabled people tracing their COVID infection (and thus their disability) to inequitable social conditions. What does that mean for the disability rights movement and for society’s obligation to provide treatment and support? Some have suggested that the addition of large numbers of COVID long-haulers to the ranks of the disabled might change how we conceive of disability by making society more accepting of “invisible” symptoms like fatigue, headaches, and brain fog as indicia of disability. Perhaps the prospect of huge numbers of people who had jobs before March 2020, but who now are unable to work and face financial ruin might spur lawmakers to ease access to existing public long-term disability support programs or extend a financial lifeline by creating a public short-term disability insurance program.

As part of reconceiving disability in response to long COVID, I hope we will attend more to the intersection of disability and race and its connections to health. Embodied Injustice takes on that project. The book first examines striking commonalities in disabled people’s and Black people’s historical and current-day experiences of health-related inequities (for example, eugenics, reproductive controls, nonconsensual experimentation, and disproportionate exposure to health-harming social determinants). Describing the experiences of persons who are both Black and disabled proved more challenging, as relatively few data – whether from surveys, academic research, or clinical accounts – are available to rely on.

The curious dearth of attention by researchers to the health-related experiences of people living at the intersection of minoritized race and disability mirrors a seeming standoffishness between racial justice activists and disability rights activists. These groups have not always regarded each other as natural allies. Their relations have been limited and at times fraught. For example, the Movement for Black Lives’ 2016 policy platform expressed a commitment to the needs of the most marginalized Black people, but it failed to include disabled Black people, an omission for which it was criticized. (A revised Policy Platform issued in 2020 includes a plank calling for “end[ing] the war on Black health and Black disabled people.”) At the same time, the hashtag #DisabilityTooWhite – created by activist Vilissa Thompson – faults disability advocacy groups and Disability Studies scholars for their overwhelming Whiteness and for their failure to incorporate and address the concerns of disabled people of color. The distance between two movements with similar and overlapping goals may be puzzling. Two factors help explain the friction: the unjust origins of many Black Americans’ disability and a history of White people equating Blackness with disability as a means of subordination. Embodied Injustice illuminates the roots of the distance between these movements and argues for the moral and strategic value of an intersectional approach to race, disability, and health, an approach that could open avenues of conversation and coordination between the two movements. The looming challenge of long COVID underscores the need for cross-movement commitment to advancing health equity.

About the Author: Mary Crossley

Mary Crossley is a Professor of Law and John E. Murray Faculty Scholar at the University of Pittsburgh School of Law. She is a member of the Pennsylvania State Advisory Committee to the U.S. Commission on Civil Rights and is widely published on health-related inequity....

More Than A Narrative Of Science...

More Than A Narrative Of Science...

What Does Epilepsy Mean, Does It...