Talking in Clichés: The Use of Stock Phrases in Discourse and Communication. 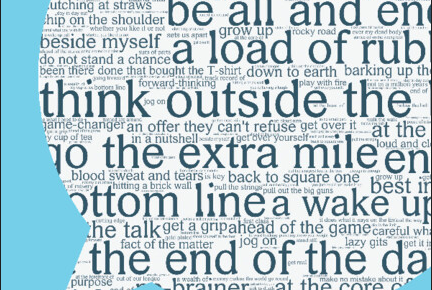 A love letter to clichés

Why did we write a monograph on clichés? On clichés, for heaven’s sake! Doesn’t everyone avoid them like the plague? Rolling their eyes whenever anyone runs one up the flagpole? Vowing to literally avoid them going forward?

Clichés: these apparently hackneyed, over-used, tired, and often much maligned excuses for language behaviour? Well, we’ve found through more than two years of extensive research and analysis they are actually used in many, varied, and even in highly creative ways by speakers to signal their identity, their agreement, their group belonging, their politeness, and even their measured challenge to what has been said.

Yes, we were as surprised as you.

Our initial interest in clichés stemmed from two perspectives.

First from the fact we’re both linguists interested in language in interaction, or “language in use” (albeit from different perspectives). That is, we’re interested in how each person utilises their linguistic resources and situational creativity to co-construct meaning with their interlocutors at any specific point in a discussion.

Within any and every sector, within any and every institution, or business, or organisation, there are similar and similarly recognisable specific ways of speaking which will, in all likelihood, include as linguistic resources – clichés.

We can’t escape them.

Make no mistake, every linguistically functioning adult in society uses clichés. As we move through our lives, and into and out of different communities of linguistic practice (work, school, home, friendship groups, etc.) which we do each day, we – perhaps unsurprisingly – slot easily enough into slightly different ways of speaking to members of each of those communities of linguistic practice.

That is, we have specific ways of speaking to, and being spoken to, by our work colleagues and again a different-but-recognisably specific set of ways of conversing with our family members at home. Consider the cognitive resources that would be needed to speak completely differently, hour by hour, day by day, to different groups in different communities of linguistic practice. Imagine having to change, completely, your way of conversing when moving from home to work to school to friendship groups to shopping. It would be exhausting. One thing, of many, that humans are good at is seeking efficiency in behaviours. Language, of course, is behaviour.

It should be no surprise that clichés are efficient language resources. We use them, and we use them perhaps more gleefully than many would like to admit, precisely because they are shared resources, known touchpoints, phrases with largely stable meanings which, when used, mean the same thing to speaker and hearer, time in, time out. In short, they are efficient.

What we found, however, is that their stability does not mean they cannot be, and are not used creatively. Quite the contrary. Our book, moving on briskly from the concept of clichés as formulaic language, lacking in thought or originality, covers the role they play as socio-semiotic resources, signalling genre of communication and, as alluded to above, the community of practice membership and discoursal norms. We then explore clichés as topoi – as recognised and regularly employed tools of communication – exploring, first, their role in news reporting and reception, and audience participation and positioning. Interestingly enough, as the book demonstrates, clichés are used for persuasion and for argumentation when functioning as topoi. We then explore their role as socio-cognitive representations in brand advertising, and corporate discourses. The final part of the book we first explore the role of clichés as politeness strategies, enhancing, challenging or maintaining the ‘face’ of others, or self; before moving on to the role of clichés as markers, or creators of self-identity construction and projection, primarily utilising reality television and broadcast discourse.

As the book moves on, we found the creativity in innovation – through intense and repeated mixing, amending, or otherwise creating highly novel instantiations of existing clichés – increased as well, especially in the chapter representing the research and analysis on self-presentation of own identity.

Overall, our research indicates that clichés overwhelmingly fulfil ideational functions (when they convey a speaker’s particular view of reality), and ideational ones (in terms of relationship management, face construction and identity expression).

It’s safe to say, when we set out on this journey of discovery, we did not expect quite this broad and exciting vista in this hitherto undiscovered country.

We hope you enjoy reading the book as much as we enjoyed writing it.

About the Author: Stella Bullo

Stella Bullo is a Researcher in Discourse Studies at Manchester Metropolitan University. She is the author of Evaluation in Advertising Reception (Palgrave, 2014). Her work on health discourse has been featured in BBC Radio World Service, The Conversation and The New York Times....

About the Author: Derek Bousfield

Derek Bousfield is Head of Department and Reader in Pragmatics and Communication at Manchester Metropolitan University. Prominent publications include Impoliteness in Interaction (John Benjamins, 2008) and Impoliteness in Language (co-edited with Locher, De Gruyter, 2008)....