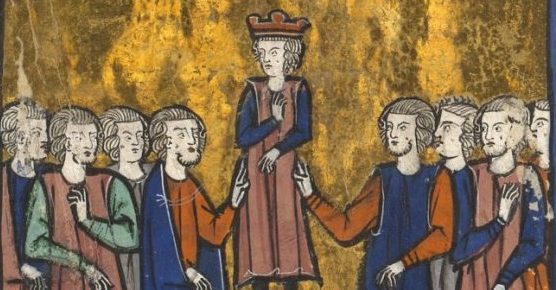 The succession of a child king was a relatively common occurrence across medieval Europe, but kingship is still usually studied from an adult-focused perspective which sees boy rulers as paradoxes or unimportant pawns.

Royal Childhood and Child Kingship seeks to uncouple conceptions of rulership between the eleventh and thirteenth centuries from the automatic and exclusive inference of adult authority. Because the book adopts a comparative approach across the kingdoms of England, Scotland, France and Germany, it also reveals how the dynamics of children’s encounters with royal rule changed over time.

Boys had often been prepared for positions of power and authority well before their succession. Focusing on children’s early experiences of rulership shows the various ways they were already included within the political sphere. Parents secured prayers for their health and future prosperity, petitioners sought their assent and testimony to royal actions, and magnates swore oaths of fidelity or performed homage to them. The future Philip II of France attended important diplomatic meetings between his father and the king of England, first at Montmartre when Philip was four years old and again at Gisors when he was nine. Children’s integration within far-reaching political and social networks meant that communities had already invested in them, recognising their present significance within the ruling family and their potential as independent rulers in future.

Kingship had to be flexible and adapt when a boy was on the throne. Sometimes practical adjustments were required. ‘[C]hild-sized robes of state’ had to be found for the nine-year-old Henry III of England to wear at his coronation in October 1216, according to William Marshal’s biographer. Royal chanceries experimented with how to represent a child’s rule. A desire to emphasise the king’s childhood could inspire the development of entirely new documentary formulae, as in references to the ‘tender age’ of the German king Henry IV in diplomas issued during the 1060s. Because child kingship required greater recourse to collaborative decision-making, a child’s succession could also catalyse innovations in practices of royal government and counsel.

Children were important political actors in medieval society, especially those who embodied royal authority. Once a child became king, their presence and participation in decision-making was important even if others were governing the kingdom on their behalf. When a widow brought a legal case against Dunfermline Abbey in the mid-thirteenth century, it was the presence of the twelve-year-old king of Scots, Alexander III, which allowed the case to be settled. The public performance of justice relied on the boy king personally inspecting an earlier charter and ordering the document to be read aloud in his presence.

At the heart of Royal Childhood and Child Kingship are eight boys who became kings before reaching the age of fifteen. Their experiences, when situated within a contemporary context, show how fundamental childhood could be within medieval political society and the value placed upon children’s contributions to kingship.

About the Author: Emily Joan Ward

Emily Joan Ward is a postdoctoral fellow at the University of Edinburgh. She began her British Academy funded project on 'Adolescence and Belonging in Medieval Europe, c.1000–c.1250' in her previous role at University College London. Royal Childhood and Child Kingship is her first book....