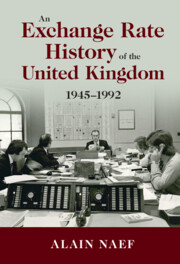 What do you find so interesting about sterling and currencies more broadly?

The story of sterling after the second world war is fascinating as it is mirroring the decline of the British Empire. Sterling was the currency of a whole colonial Empire which slowly declined. The GDP of the United Kingdom was falling, and so was the international strength of its currency. And to avoid a hard landing of the pound, Britain still used its military might to try to force colonies and former colonies to hold on to the pound as a reserve currency. But as the pound was falling, so was Britain’s military might and its place in the world. In 1956, during the Suez crisis, it became clear that the US was now the global leader. Then Britain’s place in the world even diminished further. The Bank of England was first consulted for important American decisions. By the end of the book, the US simply informed the UK of its decisions.

What do you think are the most important elements for the reader to take away?

What the book shows is that exchange rates are about economics and macroeconomic models, but not only. The way the Bank of England dealers understood the exchange rate was more about animal spirits. They were jousting against the market. Taking it by surprise. Trying outsmarting it. But this all soon became too much for a few dealers to manage. Smart money, or huge hedge funds with large means and a lot to win and little to lose, emerged in the 1980s and 1990s. Among these hedge fund managers was the particularly brilliant George Soros. He spoke to the Bundesbank president Helmut Schlessinger a few weeks before Black Wednesday. And he felt that the Bank of England would not be able to do much against huge flows leaving the UK for Germany. This especially if there was little support from Germany.

What were the consequences of the 1992 Black Wednesday crisis for Britain?

The 1992 crisis of the pound can be understood simply as an economic crisis. It marked the end of the Bank of England involvement with exchange rates, leaving the pound to float. But it was much more than just an exchange rate crisis. It marked the beginning of the cooling of relations between the UK and Europe, which would eventually culminate in Brexit. While Germany was ready to sacrifice a lot to keep France within the Exchange Rate Mechanism (ERM), the same cannot be said for Britain. And once the pressure on the pound became too important, Germany did little to keep the UK within the exchange rate agreement which would later turn into the Euro. This episode was a large national trauma with huge losses for the Bank of England as I show.

Who are the heroes and villains of this book?

This book contains its fair share of heroes and villains. Villains are for the reader to discover and are mainly present during the 1992 Black Wednesday crisis. But the heroes at the heart of the book are the Bank of England dealers. At first, they were mainly market traders, not economists. As I said, they tried to fight market animal instincts. Later, they became more analytical. But they were essentially dedicated civils servants. They followed instructions, sometimes contradictory, laid out by Her Majesty’s Treasury. I had the chance too meet one of these traders, William Allen, who worked as a dealer at the Bank during the later part of his career. He also was in the dealing room during Black Wednesday, and he gave me a detailed account that fed the story of the book.

Who was your inspiration for that book?

There are several inspirations. First the title is a clear reference to Anna Schwartz, a leading economic historian. She cowrote a book with Milton Friedman which set a new standard in economic history, titled “A Monetary History of the United States, 1867–1960”. I drew inspiration from their style, mixing economic charts with narrative analytics. They set a new standard for economic history and I am trying to follow in these footsteps. Other than that, Catherine Schenk is a scholar that really inspired me. She wrote two excellent books on sterling, and notably “The Decline of Sterling” which is close in topic to mine, but with a different focus. Her work really inspired me and I tried to follow in her footsteps sticking closely to archival research.

I saw that the book will be published as open access. Can you tell me more about why you chose that option?

Sure! Open access means that the PDF of the book will be available for free on CUP’s website. Anyone can download it and read it. People wanting to buy a physical copy of the book will also be able to do so, just like they have always done. This was made possible thanks to an open access grant by the Swiss National Science Foundation, which funded part of the writing of the book. The advantage will be that the book can get more readership, especially for people just wanting to quickly review a small detail point. For people wanting to read it from cover to cover, they will still be able to enjoy a physical copy.

About the Author: Alain Naef

Alain Naef is a research economist at the Banque de France working on the international monetary system....