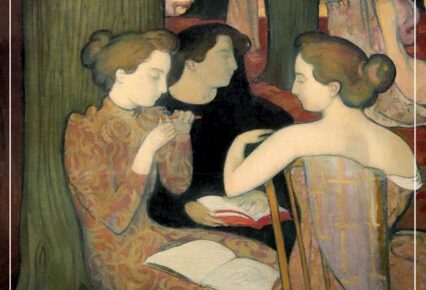 What know we of the secret of a man?”

No, my Lucrezia; bear with with me for once’.

Most readers will recognize in the lines above what we might call conversational situations. We expect them to lead to extended, turn-taking exchanges. Such talk between persons is common: it is one of the ways we manage to live together familiarly.  What we are reading – and mentally hearing – in the examples above are fragments of such talk.

But a poet has been at work in these examples.[1] If we read further, we see that talk has been ordered into lines of verse. We feel the regulating beat of meter and discover patterns of sound: alliteration, assonance, rhyme.  The rhythms and inflections of shared speech have been arranged in the visual and auditory patterns of poetry – a poet’s work, of which the speakers remain unaware. The two speakers in the first example – who, as we learn, are former companions and schoolmates who have gone their separate ways  – are made to share a line, their differences in politics, morality, and temperament bridged by a prosody that affirms the ties of an old friendship. This is poetry with a purpose: Tennyson is using poetry to model the possibility of order in the midst of social disorder, looking back to the importance of conversation in the classical idyll and adapting its forms to address the far-from-idyllic social relations around him in 1830s England.

The speakers in the second two examples, on the other hand, appear to foreclose conversational exchange from their opening words: they signal their intentions never to stop talking. Goaded by the need to justify themselves to strangers or intimates, they engage them – and dominate them – through “talk.” Or is it the reverse? The poem’s arrangements make audible and visible those silent, skeptical listeners’ power to shape the flow of talk, to provoke the speaker’s hesitations, pauses, interjections, asides, self-interruptions, and sudden shifts in direction. Conversation, however asymmetrical it may seem, is still conversation in Browning’s dramatic monologues.  The poem reveals to the attentive reader the obstacles that prevent the exercise of conversation as a mode of social care. As readers we observe how Browning’s speakers and auditors warp conversation’s shapes and forms, compelled by the force of private needs but also by the pressures of historical conditions, whether political, social, religious, or aesthetic. For Browning and Tennyson, as for so many poets from Coleridge to Paul Celan, the matter of conversation has become an urgent subject for poetry.

Conversing in Verse considers poems written with conversation in mind. I look back to older forms of verse conversation to consider what has happened to them since the late eighteenth century. What is at stake in what one might call the concept of conversation, in or out of poetry? Why does conversation matter? Why do some poets think of poetry as a mediated form of conversing? How does the idea of conversation then shape the structures, the tropes and figures, the language, the rhythms and the prosody of poems? Under what conditions does conversing in verse become urgent or even desperate, and what happens to the shapes of poems then?

The poets I study in this book explored the reparative possibilities of a multi-voiced poetry as a social, and sociable, form. Tennyson, Robert Browning, Coleridge, Wordsworth, John Clare, Christina and Dante Gabriel Rossetti, Swinburne, Michael Field, and Thomas Hardy each composed poems that might be described as opening conversations with phenomena outside themselves. The models for a sociable lyric were there in still vigorous traditions of popular verse like the ballad and in the longer history of literary and popular verse, including classical idylls, epigrams, and tragedies. Turning to such models, nineteenth-century poets extended their ideas of what it might mean for poetry to keep company with other beings. That they felt poetry needed conversation, as conversation needed poetry, is testimony to the fact that these poets remained turned toward the world. Their experience of rapid change and with it seemingly many losses in the possibilities for relating to other beings, human and nonhuman, made conversing in verse an increasingly pressing matter. In a surprisingly wide range of nineteenth-century poems, figures of sociability inscribed in the turns and pauses of verse enact difficult or impossible exchanges between persons, or between persons and nonhuman beings or things from gods to ghosts, birds and animals to works of art.

Twentieth century poets, faced with still more discouraging conditions for repairing damaged social relations (after two world wars and a holocaust) have been still more urgently drawn to think of poetry as a kind of desperate conversation with beings beyond the self.  For poets like Paul Celan (whose profound influence on the criticism and philosophies of conversation I consider in my introduction), or Louise Glück (whose reflections on poetry’s secret conversations I turn to briefly in my epilogue), poetry must continue to converse, to engage the phenomena of the world in the forms of conversation, even against great odds.  Like the poets of the long nineteenth century before them, Celan and Glück  in their quite different ways discover through poetry possibilities for a sociability that is always threatened or lost.

These questions have an all-too-present urgency in the moment in which we now live. Looking back at how poets have made conversations happen in verse may lead us to reflect on what is happening to conversation – and to conversational forms of poetry – in our own time of rancorous political distrust and a global pandemic, when mediated substitutions of very different kinds replace face-to-face conversing as that with which we must make do.

[1] Or rather two poets: Alfred, Lord Tennyson, in example one, lines 93-94 from ‘Walking to the Mail’, one of his ‘English Idyls’; Robert Browning, in examples two and three, the opening lines from “Bishop Bloughram’s Apology” and “Andrea del Sarto.”

About the Author: Elizabeth K. Helsinger

Spies, Writers, and the Cold War in...

Spies, Writers, and the Cold War in...