Why American Song and Struggle? And Why Begin with Columbus?

Written by: Will Kaufman 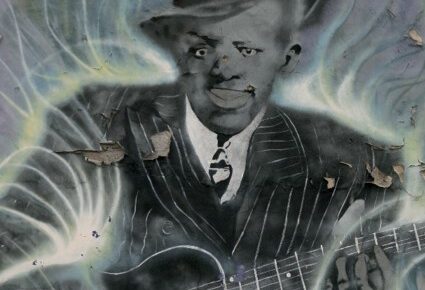 I’ve made my name mostly as a Woody Guthrie scholar. Around the time of the Guthrie centenary in 2012, I became increasingly aware of references to Guthrie as ‘the father of American protest music’ and ‘the first singer-songwriter’ etc. That implied something that Woody himself would surely have denied: that he hadn’t an extensive inherited song tradition to build upon. Even now, a quick Google Books or Amazon search with variations of the retrieval term ‘American protest music’ brings up a top-heavy selection of titles lodged in the twentieth century—indeed, overwhelmingly the latter half of the century, the period that I call ‘A.G.’ (‘After Guthrie’). True, some books do have chapters devoted to specific earlier topics, like Joe Hill and the Wobblies, or spirituals, or abolitionist songs. Others offer the history of particular musical genres (mostly folk, followed by rap, gospel, and soul). But you would be hard pressed to find something more comprehensive—something that spans musical genres as well as the many centuries in the era B.G.—Before Guthrie.

I have always had a problem with the concept of ‘protest music’, which strikes me as a bit reductive. Isn’t there more to the issue than mere ‘protest’? I would argue that ‘protest songs’ are likely to have an identifiable target or object of protest; for this reason (among others), Bob Dylan dismissed them as mere ‘finger-pointing songs’. Woody had this problem, too: ‘protest’ was too narrow a concept for him. For this reason he hit on an idea that he proposed to his producer, Moe Ash: an album of songs not about ‘protest’, but rather about something broader, larger: Struggle. (His posthumous album of that title was released in 1976 on Folkways Records.)

Now arguably, all ‘protest songs’ are songs of struggle; but the reverse is not necessarily the case. A song of ‘struggle’ may be more philosophical. It may be directed inwardly in a way that a song of ‘protest’ is not. It may even be downright vague. Dylan’s ‘A Hard Rain’s A-Gonna Fall’ is a case in point: it has been cast as a ‘protest song’ calling out war, or nuclear fallout, or starvation under capitalism, or philistinism, or environmental degradation, or (fill in the blank); and it might be credibly discussed as any of these. But thinking exclusively in terms of ‘protest’ would limit, diminish, or possibly shut down the discussion of a particular song that might otherwise shed important light on a given historical moment or aspect of American life. ‘Struggle’ opens up the discussion.

People on the American continent have always sung of their struggles—and have often struggled to sing. Yet, until now, a comprehensive history of American song and struggle before 1940—when Woody Guthrie arrived on the national scene—has not been written. When I set out to fill that gap, I found that the first thing to deal with was the silence. Consequently, so many of my earliest sources are fragments, mentioned somewhere in an old journal or, say, a colonial report. Some come to us through translations of translations – songs that were once sung, but now all that remains are the words, not the music. For me, it all begins with the Mexica Songs – the Cantares Mexicanos—Aztec laments left in the immediate wake of the Spanish conquest of the late fifteenth and early sixteenth centuries. That conquest began, musically, with Columbus and the conquistadors singing the Salve Regina as a rite of taking possession of lands that were not theirs. ‘Salve Regina, Mater misericordia, vita, dolcedo…’ How that sounded to Indigenous ears, we don’t know. But for the Aztecs, the end game of the conquest was recorded in their Cantares Mexicanos, one of which is translated:

Broken spears lie in the roads;
we have torn our hair in our grief.
The houses are roofless now, and their walls
are red with blood.
Worms are swarming in the streets and plazas,
and the walls are splattered with gore.
The water has turned red, as if it were dyed,
and when we drink it,
it has the taste of brine.

Who knows how it was sung in the original Nahuatl – how it sounded? We don’t know. We can’t know. But for me, this begins the history of the tradition that Woody Guthrie inherited. In American Song and Struggle from Columbus to World War Two, I seek to uncover the rest of that history.

About the Author: Will Kaufman

Will Kaufman is Professor of American Literature and Culture at the University of Central Lancashire in Preston, England. He is the author of Woody Guthrie, American Radical (2011), Woody Guthrie's Modern World Blues (2017), and Mapping Woody Guthrie (2019). His other books include The Comedian as Confidence Man (1997), The Civil War in American Cu...