Written by: Jeremy A. Crang 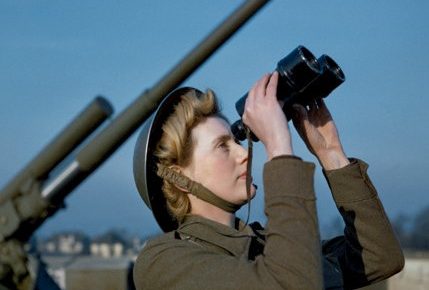 It is sometimes overlooked that many thousands of women served alongside men in the British armed forces during the Second World War. Over the conflict, some 600,000 women were absorbed into the three British women’s auxiliary services – the Women’s Auxiliary Air Force, the Auxiliary Territorial Service, and the Women’s Royal Naval Service. These servicewomen performed important military functions for the RAF, army and Royal Navy, both at home and overseas, and their tasks ranged from cooking, typing and telephony to stripping down torpedoes, overhauling aircraft engines, and operating the radar for anti-aircraft gun batteries. Sisters in Arms traces the history of these women’s auxiliary services and the integration of women into the nation’s armed forces.

The story of Corporal Daphne Pearson illustrates both the bravery shown by servicewomen as well as some of the challenges they faced in entering the male military sphere. At 1.00am on 31 May 1940, twenty-nine-year-old Pearson, a WAAF medical orderly, was asleep in her bunk at RAF Detling in Kent when she was woken by the noise of an Avro Anson aircraft returning from operations. The tone of the engines indicated something was wrong. Instinctively, Pearson pulled a jersey and pair of trousers over her pyjamas and rushed outside to see the Anson crash land in flames in a nearby field.

Ignoring calls for her to keep away, she ran towards the red glow of the crash site. Two of the injured aircrew had extracted themselves, but Pilot Officer David Bond was more seriously hurt. Although the Anson was ablaze, and there were fuel and bombs on board ready to detonate, Pearson courageously stood on the burning wreckage, roused the stunned pilot, and assisted in getting him clear. When Bond had been moved some thirty yards away, a 120lb bomb went off and she threw herself on top of the pilot to protect him from the explosion. The blast was so strong that others arriving to assist were blown over like tents in a gale.

After helping Bond onto a stretcher, and despite the risk of further detonations, Pearson returned to the Anson to search for the missing wireless operator but found him dead. Having snatched a few hours sleep, she calmly reported to the camp sick bay at 8.00am to resume her normal duties. In recognition of her gallantry, Pearson was presented with the George Cross, prompting one commentator to write that ‘The bravery of Corporal Joan Daphne Pearson… has become a matter of national pride.’

Her George Cross is now among the collections of the Imperial War Museum, as is Dame Laura Knight’s evocative wartime portrait of her. This picture – which is displayed in the Lord Ashcroft gallery in the Museum – was painted by the renowned war artist in her studio in the Malvern Hills during the summer of 1940 whilst the Battle of Britain raged in the skies over southern England.

During the sitting, Pearson reported that Knight originally depicted her holding a rifle which, in tandem with the tin helmet perched on the back of her head that resembled a woman’s bonnet, the artist thought would make ‘a good line’. Pearson was much in favour of this combative portrayal. She wrote that ‘If Germans kill women and children deliberately in their homes and in the streets, machine gunning – then the women must be prepared to kill to protect their children’. But such an image was controversial since airwomen were not permitted to carry arms and she admitted that ‘the Air Min[istry] will be furious’.

In the end, a respirator was inserted in place of the rifle. Pearson later recalled that ‘The irony of the gun was over-ruled by using a gas mask [but] in truth no way would one open up a gas mask in such an artistic manner.’ The replacement of a rifle with a respirator – the apparatus of life over that of death – tells us something about the gender tensions surrounding the service of women in the wartime armed forces. These tensions, and other aspects of women’s military service, are explored in the book.

About the Author: Jeremy A. Crang

Jeremy A. Crang is Senior Lecturer in History at the University of Edinburgh. He is the author of The British Army and the People's War, 1939–1945 (2000) and co-editor (with Paul Addison) of The Burning Blue: a New History of the Battle of Britain (2000), Firestorm: the Bombing of Dresden, 1945 (2006), Listening to Britain: Home Intelligence Repo...