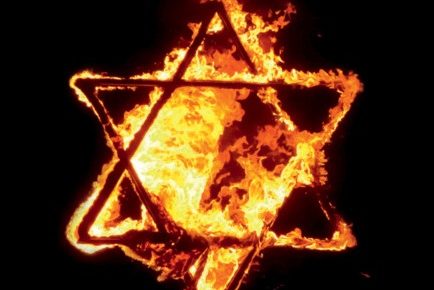 Antisemitism is on the rise throughout the world, and it increasingly wraps itself in moral indignation, particularly in its anti-Zionist mode, to create the illusion of legitimacy, as it delegitimizes Jewish existence.  In the end, the antisemite’s claim is not that all Jews are evil, but rather that all evil is Jewish.  And yet the questions linger: What is the antisemite anti-?

Antisemitism cannot be reduced to just another form of racism, xenophobia, or bigotry.  It does not stem merely from fear, envy, or resentment, even though such emotions are often in the mix.  Jewish people are not a race, culture, or ethnic group.  The key to the matter of who is a Jew is Judaism.  As the infamous Nazi ideologue Alfred Rosenberg insisted, humanity is poisoned not by Jewish blood but by Judaism.  Whether a particular Jew is reform, orthodox, or atheist, his or her identity as a Jew stems from Judaism, from the Covenant of Torah: without the Torah, there would be no Jews.  Here we begin to glimpse what the antisemite is anti-.

The Torah’s commandment repeated most often—thirty-six times—is the commandment to care for the stranger k’mokha, “as yourself,” where k’mokha means “that is who you are”: you are the loving in the loving kindness with which you treat the stranger.  The other human being, no matter how “strange,” is a ben adam—a child of Adam.  Why does God begin the creation of humanity with just one human being, and not two?  Say the sages: so that no one can say to another, “My side of the family is better than your side of the family.”  There can be no teaching more anti-racist.  The antisemites are not antisemites because they are racists; rather, they are racists because they are antisemites.  They have to first eliminate this fundamental teaching of Judaism in order to arrive at a racist outlook.

Thus what begins with the Jews does not end with the Jews.  Elie Wiesel affirmed that there comes a time when one cannot be a human being without assuming the Jewish condition.  For the Jewish condition is not the condition of the victim—no, it is the condition of the witness.  It is the situation of the one who answers, “Hineni!—Here I am for you!” when confronted with the questions that define us from before the beginning: Where are you?  Where is your brother?  And what have you done?  These are the questions that comprise the Jewish Question, for which the antisemite seeks a Final Solution.

About the Author: David Patterson

David Patterson is Hillel A. Feinberg Distinguished Chair in Holocaust at the Ackerman Center for Holocaust Studies, University of Texas at Dallas. A winner of the National Jewish Book Award and the Koret Jewish Book Award, he has published more than 240 essays and 40 books, including Shoah and Torah (2022), Portraits: Elie Wiesel's Hasidic Legacy ...