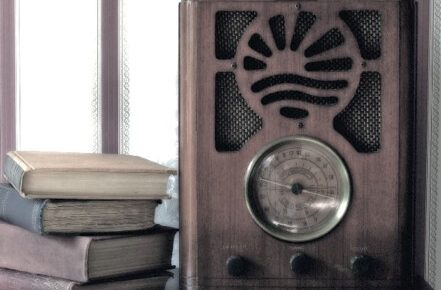 Sometimes, during research, what appears to be a narrow, well-charted path opens out into a startling vista. In 2016, my PhD supervisor, Anna Snaith, advised me to look at the transcripts of early radio broadcasts that were printed in the BBC magazine The Listener. I had just begun the research for a PhD thesis on identity in the novels of Virginia Woolf and I was considering writing a chapter on the links between Woolf’s depictions of identity in The Waves – particularly her use of the language of waves, particles, and light – and contemporary quantum physics. The idea was that The Listener, and the radio more generally, might be a source of Woolf’s scientific knowledge. Woolf was known to be an avid radio-listener – perhaps the rapid developments that occurred in quantum physics during the 1920s might have been mentioned to early listeners of BBC radio, which began broadcasting a hundred years ago, in 1922.

I spent months sitting at a computer in the British Library, entangling myself in reels of microfilm and reading through every mention of science I could find in the issues of The Listener from its inception in 1929 to Woolf’s death in 1941. What I found was a rich body of material – one which, I later discovered, had been very little explored by researchers. Science was not only mentioned on the radio in the 1920s and 1930s; it was a prominent aspect of the output of the BBC’s Talks department. Some of the most prominent scientists of the day – Ernest Rutherford, Julian Huxley, Arthur Eddington – delivered high-profile talks on the latest scientific discoveries. These talks, moreover, did not just relay scientific information. They were engaging, speculative, creative. Most importantly for the course of my research, they returned, again and again, to the question of the nature of human identity. In various, idiosyncratic ways, these radio scientists explored the idea that the entities of science – waves and particles, nerves and cells, embryos and evolutionary trees – could transform our understanding of the self. In particular, they asserted that science tended to challenge the concept of a singular, indivisible self and to present us with a self that was multiple and expansive.

The same idea, I gradually came to realise, was a central insight of Woolf’s writing. As any reader of Woolf knows, her works explore the illimitable, multifarious nature of the self. They do so, moreover, using the language not just of quantum physics, but of neurology, technology, and evolutionary science as well. In short, by reading her novels alongside BBC science broadcasts, I found that both used science to form a vision of a multiple, expansive self. This resemblance was the seed that grew and blossomed and became not only the topic of my thesis (it wasn’t just one chapter anymore) but the material for my book, Virginia Woolf, Science, Radio and Identity. I found that the connections that could be drawn between Woolf’s novels and contemporary popular science (especially radio science) were rich, intriguing, and almost endless. Moreover, when I eventually embarked on the challenging task of transforming my thesis into a book, I found that I needed to widen my view to modernist culture as a whole: to explore the ways in which scientific concepts and ideas about identity were transmitted through culture in order to understand how the congruence I had identified between Woolf’s novels and radio science came about. I found that there were numerous resonances – and, indeed, disharmonies – between the ways in which the literary writers, popular scientists, philosophers, psychologists and sociologists of the 1930s interrogated the links between science and identity. Many of these resonances feature in my book; many are still to be explored.

About the Author: Catriona Livingstone