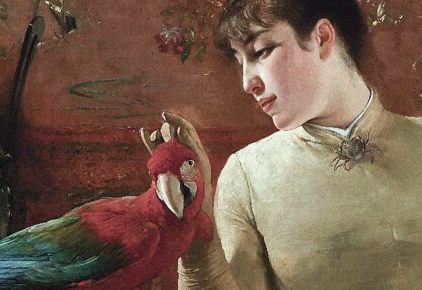 One of the most striking exhibits in the Royal Pharmaceutical Society Museum, London, is a ceramic figure of a brown bear. The animal is depicted wide-eyed, with a gold collar around its neck, its mouth pen and its lips curled into a menacing grin. Between its paws, the bear grasps the writhing form of a miniature Napoleon, complete with wooden club and trademark bicorn hat.

Behind the Napoleon-hugging ceramic bear stands a second ursine figurine, slightly taller than the first. This bear wears a striking yellow muzzle attached to a metal chain and is shown licking its nose with its bright red tongue. It too clutches a fellow being between its paws, in this case a grimacing white bulldog.

Manufactured in the early 1800s, both of these ceramic bears served as receptacles for a rather strange substance: bears’ grease. Made from the fat of dead bears, bear’s grease was the Georgian equivalent to hair conditioner. It was applied to the scalp by hairdressers to counter dryness, brittle hair and even baldness, and was believed to stimulate the growth of human hair. One advertisement for Marsh’s bear’s grease (1820) claimed that it ‘prevents the falling off or turning grey’ of the hair, countering ‘the Dryness of the Head and the Debility of the Bulbs of the Hair’.[1] A later advertisement for James Lispcombe’s bear’s grease (1838) stated that his product, ‘by bracing the pores of the head, strengthens the weakest Hair’ and should be applied after ‘sickness, accouchement, alarm, trouble, study…sea bathing and violent exercise’.[2]

According to the perfumer Alexander Ross, bear’s grease was invented by a London apothecary named Mr Townsend in the late seventeenth century. Initially its use was limited, but by the mid-eighteenth century it was widely available and in high demand across Britain. The product enjoyed a substantial boost in popularity in 1795 when William Pitt’s government imposed a controversial tax on hair powder to fund the war effort against revolutionary France, forcing many financially-challenged Britons to abandon powdered wigs in favour of their natural hair. Generally imported from Russia, bear’s grease could be found in the shops of most perfumers, druggists and hairdressers and typically retailed at around 2s 6d per pot.

Bear’s grease was not, however, without controversy. Expensive to obtain in its pure form, the substance was frequently adulterated, being blended with – or entirely replaced by – other, cheaper products. James Rennie, author of The Art of Preserving the Hair (1826), alleged that bear’s grease was routinely substituted for ‘the grease of dogs or goats: or in the case of those buyers who pretend to be judges of the true bearish odour, old, rancid, yellow hog’s lard’.[3] London hairdresser Jeremiah Riggs claimed that ‘every pot o’ bear’s grease in London vos sometime or other hinside a pig [sic]’.[4] So notorious was the adulteration of bear’s grease that some ‘honest’ vendors even housed live bears on their premises so that they could slaughter them publicly to prove the origin of their fat. In 1824, for instance, two hairdressers, Mr Mcalpine and Mr Money, were summoned before the Lord Mayor of London for creating a public nuisance by keeping live Russian bears on their premises in Threadneedle Street. One of the animals, it was reported, ‘could put his leg or arm out to its full extent and seize any passengers with its claws’; the other was said to be ‘almost entirely at liberty, and might, if it so pleased him, vent his displeasure on any of his Majesty’s subjects who came near him’.[5]

This is also where the pots come in, for as well as offering a stylish way of transporting and storing bear’s grease, decorated pots functioned as a token of authenticity for the product they contained, providing visible proof that it originated from bona fide sources. Some included the name and address of the vendor, embossed around the side of the lid. Others featured the retailer’s signature, wrapped around the pot on a piece of paper.

As the Napoleon-munching bear described above suggests, however, bear’s grease receptacles soon surpassed their original function as certificates of authenticity and developed into more elaborate forms of branding. Sculpted bears with removeable heads gave buyers a visually arresting reminder of where the bears’ grease came from, while pot lids painted in eye-catching designs made bears’ grease pots into attractive, collectible items that remain popular to this day. Pioneered by the earthenware manufacturer Felix Edward Pratt in the mid-nineteenth century, the latter featured anthropomorphised bears rearing cubs in the forest, performing in the street, climbing a pole for buns in the zoological gardens and learning to read in an ursine school.

Bear’s grease itself fell out of popularity in the mid-Victorian period, replaced, in the 1860s, by alpaca pomatum, and, later, macassar oil, made from cocoanut or palm oil. People no longer wanted to rub bears’ fat into their scalp, and animal perfumes such as musk and civet were gradually superseded by botanical extracts and synthetic alternatives.

Bear’s grease pots, however, have survived in large numbers, long outliving the substance they once contained. They serve as a tangible reminder of a time when the fur, feathers, bones and even fat of all kinds of animals were regularly commodified for human use.

About the Author: Helen Louise Cowie

Helen Cowie is Professor of History at the University of York, where she researches the history of animals and the history of science. She is author of Conquering Nature in Spain and its Empire, 1750–1850 (2011), Exhibiting Animals in Nineteenth-Century Britain: Empathy, Education, Entertainment (2014) and Llama (2017)....