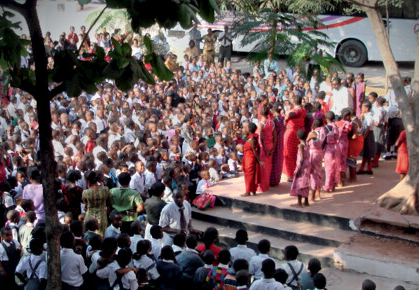 How do young people learn and embody moral values in multireligious societies? How do Christian and Muslim schools establish and reproduce social inequalities? In my book I argue that faith-oriented schools play an important role not only in negotiating but also producing and reifying socio-religious differences in contemporary, pluralistic societies.

My anthropological study focuses on Tanzania, where Christians and Muslims have lived together, by and large peacefully, for a very long time. Membership of these two religions is roughly equal amongst the part of the Tanzanian population that does not adhere to ‘traditional religion’ (about 30%). During German and later British colonial rule, Christian and Muslim actors secured political, social and moral influence through their educational institutions. In particular the missionary schools implemented the agendas of colonial states seeking to train docile and economically productive subjects. Missionary schools also embodied the promise of upward social mobility and promoted ‘civilized’ values and worldviews in the colonial context.

All these dynamics also shaped how the significantly smaller number of Muslim schools operated. These schools were established mainly by the East African Muslim Welfare Society, founded by the Aga Khan in 1945, and primarily served the economically successful ‘Asian’ members of the Shia division of Islam. They catered less to the ‘African’ Muslims who had converted to different types of Sunni Islam throughout the nineteenth and early twentieth centuries. This substantially larger group of Muslims was marginalized overall by the education systems of both the colonial and postcolonial states.

Since the early 2000s, Christian and Muslim schools have gained new prominence as families and pupils have pursued both educational opportunities and a good life in rural and urban Tanzania. Nationalization of all private – including religious – schools by the post-independence socialist government in 1968 has since been reversed by neoliberal reforms and privatization. From the mid-1990s Christian and Muslim schools of various denominations began to compete with state schools as well as with each other. These faith-oriented schools follow the same secular state curriculum and are subject to state standards for examination. They also combine secular education with the moral character-building of young people, for instance through joint church and mosque attendance and the teaching of moral values and faith-related content. Most of these schools admit students of diverse religious backgrounds, however, those institutions categorized as ‘seminaries’ cater exclusively to pupils of their own faith.

Especially in rapidly changing urban centres such as Dar es Salaam, the new generation of Christian and Muslim schools provides moral guidance to pupils at primary, secondary and tertiary levels. They involve young people actively in the process of articulating their morality, for instance with regard to relationships with the self and others; body and dress; notions of doing good and bad; the presence of religious difference in school and everyday life; and the ethos of learning and work. In this respect, learning and teaching values in these faith-oriented schools does not involve a retreat into religiously exclusive communities and environments. On the contrary, even in the Islamic seminaries, which are open only to pupils of the Islamic faith, students and teachers learn how to reconcile their lives in a pluralistic society with their simultaneous longing for leading a ‘pure’ and ‘clean’ life in morally and materially challenging cityscapes.

Yet while Christian and Muslim schools in Tanzania are all promoting the value of living together well in a highly diverse society, they are also implicated in the production of social and economic inequalities. Christian schools in particular – run mainly by the Catholic and Evangelical-Lutheran churches, as well as by individuals from the neo-Pentecostal spectrum – have become highly attractive as places for academic learning and success. Many of them charge comparatively high school fees, thus catering in the main to the growing middle and upper classes. These prominent Christian schools are on par with the most successful Muslim schools founded by the Shia organisations and the Gülen network from Turkey. At the same time, they differ notably from the majority of those Muslim schools linked to revivalist Muslim organisations and individuals.

The revivalist movement was strongly influenced by Muslim students returning from Saudi Arabia in the 1980s and has been highly critical of the government’s alleged favouring of Christian organizations in post-independence Tanzania. The schools of revivalist Muslim organisations and individuals were further affected following 9/11 and terrorist attacks in Tanzania and Kenya in 1998 leading to increased scrutiny from the national government. The political marginality of the revivalist movement’s schools correlates with their societally peripheral positions: The majority of Muslim schools demonstrates weaker performance and caters to families from poorer socioeconomic – and exclusively Muslim – backgrounds. For them, these schools are often the only chance for their children to get a higher education beyond the free education in government primary schools.

Against this backdrop, learning morality in Tanzania’s Christian and Muslim schools is more than the mere embodiment of values for living together well in highly diverse cities like Dar es Salaam (Arabic for ‘Haven of Peace’). In my book I argue that it is equally a matter of school students learning about privilege and marginality. It is about young people’s internalization of their unequal sociomoral positions in a society that has long been proud of its largely peaceful history of interreligious coexistence.

About the Author: Hansjorg Dilger

Hansjörg Dilger is Professor of Social and Cultural Anthropology at Freie Universität Berlin. His research interests include the anthropology of religion and religious diversity, critical medical anthropology, and the study of global and transnational processes. He is co-editor of Affective Trajectories: Religion and Emotion in African Cityscapes...