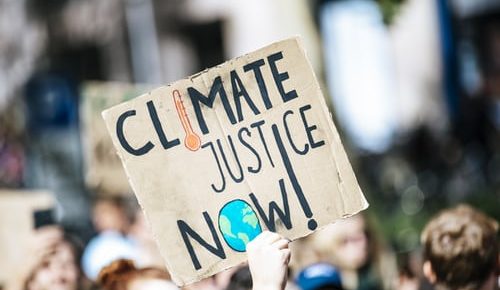 World leaders recently convened in Glasgow for the 26th Conference of the Parties (COP26) on the UN Framework Convention on Climate Change (UNFCCC). Several reports have been published in past weeks discussing the successes and failures of COP26. One notable highlight is the commitment of states to a limit of 1.5°C above pre-industrialised levels, shifting the focus from the 2°C goal as set in the Paris Agreement. Moreover, COP26 brought much needed attention to the states that are most vulnerable to the climate crisis and their efforts to clarify the applicable international law.

Tuvalu’s Minister for Foreign Affairs, Simon Kofe, gave an impactful speech standing knee-deep in the ocean on what used to be dry land. He passionately spoke about the devastating reality that is facing low-lying island states such as his own. Minister Kofe spoke on the legal efforts to maintain existing maritime zones as well as the existential threat to their statehood as their coastlines erode and submerge. But it is not just Tuvalu that is facing this reality. Hundreds of millions of people around the world will be facing displacement due to climate change. Furthermore, the submergence of low-lying, coastal territory can reduce the extent of maritime entitlements by thousands of square kilometres, and may eventually lead to loss of statehood under international law. These challenges are beyond the capacity of local governments to solve and international solutions are clearly needed. The most vulnerable states such as Tuvalu are resorting to legal avenues as diplomacy fails to address the crisis. In fact, litigation may be the only way for states suffering from the effects of climate change to be taken seriously.

The first day of COP26 saw the establishment of a Commission of Small Island States on Climate Change and International Law. This pivotal initiative is lead by Antigua and Barbuda and its purpose is to seek compensation for the effects of climate change. The Commission, which has now been joined by Tuvalu and Palau, has announced that it will seek an advisory opinion from the International Tribunal for the Law of the Sea (ITLOS) concerning state responsibility for excessive greenhouse gas emission. Similarly, Vanuatu has appointed a legal team and is preparing to request an advisory opinion from the International Court of Justice (ICJ) to clarify the extent to which large emitters of greenhouse gases are liable for the effects of climate change. This demonstrates that vulnerable states are resorting to courts and tribunals in an effort to clarify and potentially influence the development of international law.

Advisory opinions are an excellent starting point for clarifying the relevant international law because they can pave the road for contentious cases and serve as levers in future negotiations. When requesting an advisory opinion, states must decide how to frame their questions and where to submit the requests. These choices are important to the outcomes. As an example, the ICJ only issues advisory opinions if the request is made by a UN body, such as the UN General Assembly, which requires a broad support of UN member states. The ITLOS, however, can give an advisory opinion on any legal question if it has such competence under an international agreement related to the Law of the Sea Convention (LOSC). Another advantage of framing legal questions in the context of the law of the sea is that it provides a pathway to compulsory dispute settlement, allowing member states to bring disputes before the ICJ, ITLOS and arbitral tribunals.

It has already been noted that states are seeking advisory opinions concerning liability for climate change and for failure to satisfy obligations to protect the marine environment, but there are many other pressing questions. One such question relates back to Minister Kofe’s speech and concerns the rules on stability, or instability, of jurisdictional lines at sea. Low-lying island states are making concerted efforts to stabilise their maritime limits against rising seas in order to maintain their maritime zones. This is inconsistent with the general interpretation of the LOSC that renders maritime limits ambulatory and the conflicting state practice leads to legal uncertainty. However, if sufficiently widespread, this emerging practice could alter the interpretation of the law of the sea or even lay the foundation for new customary international law. The ITLOS is in a prime position to clarify this through an advisory opinion.

The international climate regime has often been criticised for lack of legal remedies. The UNFCCC and the Paris Agreement have no provisions for dispute settlement or for compensation for damages. However, states can request advisory opinions and certain disputes can be litigated under the compulsory dispute settlement regime of the LOSC. Therefore, despite the limitations of the UNFCCC and the Paris Agreement, legal avenues remain open. These are increasingly utilised by states seeking clarification on the international law on climate change and may prove vital in the fight for climate justice.

About the Author: Snjólaug Árnadóttir