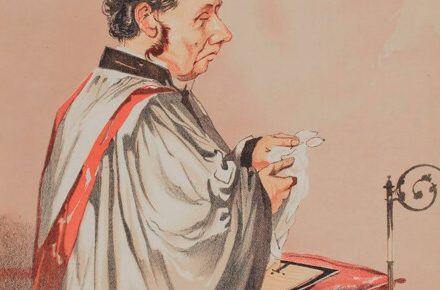 What is a medievalist doing writing about the nineteenth century? The Church’s dealings with society stretch out long fingers through the centuries. The Reformation changes created a Church of England in continuity with the Church already in medieval England but now in a new relationship with the state and its legislative authority. The further changes of the nineteenth century set the course for the fundamentally different place of the present-day Church of England. How could one not want to trace how it happened?

As a novelist Anthony Trollope could be confident that his readers would stay with him if he included in the plot of Phineas Redux in 1873 the current popular interest in the future relationship of the Church of England with the nation. The Church of Ireland had recently been disestablished and concern was being expressed in the House of Lords that the Church of England might go the same way.

A series of worries about disestablishment have proved unfounded so far. The Church of England still has a privileged place in the nation’s affairs. Its bishops have twenty-six seats in the House of Lords. The monarch is its supreme governor and Parliament approves its internal legislation. That state of affairs has its critics pressing for secularisation, or a fair share of seats for representatives of other faiths but the longstanding constitutional structure remains.

Much did change in the nineteenth century, however. As long as the Church’s courts controlled disputes about marriages, wills and burials everyone could be affected. Such litigation passed into the secular courts. Governments found they had to do something about social consequences of the industrial revolution by getting more churches built and controlling the multiplication of ‘dissenting’ chapels. Until nineteenth century Parliaments agreed to change the rules, only the Church of England’s members could become MPs and influence future legislation. Oxford and Cambridge had to be made to grant degrees to non-Anglicans. Memorable characters played a part not only in the debating and legislating but in the trying of cases still full of human interest.

So a book describing a departed England whose people almost all called themselves Christians, most were active members of the Church of England and whose Parliament took an active interest in its controversies may be of more than historical interest to anyone who wants to understand the present consequences of the changes made then.

Recent surveys suggest that, if asked, a declining proportion of the British population now say that they belong to any faith community, and still fewer attend acts of worship. This seems paradoxical, for the law says that maintained schools must provide a broadly Christian act of worship every day. Parents may withdraw their children, but a maintained school may choose to provide worship in another faith for such pupils.

This compromise reflects a recognition that Britain is now a multi-faith society. Schools are expected to provide religious education. Statutory provision for the creation and revision of an agreed syllabus remains in force from 1996, and Government had provided non-statutory guidance. It is expected to cover a full range of faiths and beliefs and the ways in which they find a place in society. It will rarely provide much of an explanation of the contribution of the Church of England.

A consequence has been a loss of widespread familiarity with in the Christian faith and its role in national life, and the more so in the case of the place of the Church of England. That may give the stories this book tells a real current interest.

About the Author: G. R. Evans

G. R. Evans is Professor Emeritus of Medieval Theology and Intellectual History in the University of Cambridge, is a graduate of the University of Oxford and holds higher degrees from both Oxford and Cambridge. She has written many well-received books in the fields of medieval and ecumenical theology, intellectual and ecclesiastical history and pub...