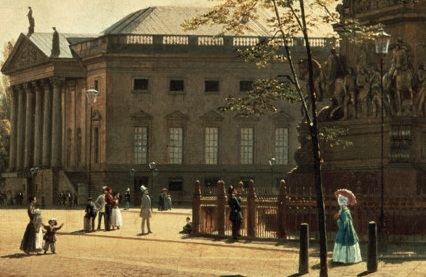 Today people tend to talk a lot about alienation as a modern crisis. We are said to feel a sense of alienation from our government, our economic system, our workplace, our religion, our community, and even our family and ourselves. Ever since the rise of the existentialist movement in the middle of the twentieth century, alienation has been a central topic in the public discourse and the academic world, where it is used extensively in numerous fields from psychology and sociology to religion and philosophy. My book, Hegel’s Century: Alienation and Recognition in a Time of Revolution, explores the roots of this concept of alienation in search of insights into why it has become so important in our own time.

The German philosopher G.W.F. Hegel is known today mostly as a dry and incomprehensible thinker, whose works are best left to languish on the shelves of the library. But Hegel had a great gift for inspiring young students. Indeed, his lectures at the University of Berlin in the 1820s attracted some of the best minds of the generation, such as Heinrich Heine, Ludwig Feuerbach, Bruno Bauer, Max Stirner, and David Friedrich Strauss. Even after Hegel’s death in 1831, students interested in his philosophy continued to flock to Berlin in the hope of learning about his thought. This second generation of students included thinkers such as Søren Kierkegaard, Karl Marx, Friedrich Engels, Michael Bakunin, and Ivan Turgenev. Although they never heard Hegel lecture in person, they were all stimulated by the electric atmosphere surrounding his philosophy in Berlin at the time.

This idea found a strong resonance among his students, who felt a deep sense of alienation with the social, political, and religious life of the day. This was the period that culminated in the Revolutions of 1848, in which many of Hegel’s students played active roles. As his students gradually developed their own ideas, they remained forever marked by Hegel’s influence and the exciting experience of their youth in Berlin. They expanded and disseminated Hegel’s ideas about alienation in many different academic contexts. They founded some of the enduring movements of the age, which played defining roles in creating the academic landscape of the twentieth century. Marxism, Existentialism, Anarchism, and what has come to be known as irrationalism, egoism, or nihilism all came from work of Hegel’s students. Hegel’s Century thus tries to show that Hegel is still a thinker well worthy of our attention today in our modern age of alienation.

This work was produced at the Institute of Philosophy of the Slovak Academy of Sciences. It was supported by the Agency APVV under the project “Philosophical Anthropology in the Context of Current Crises of Symbolic Structures,” APVV-20-0137

About the Author: Jon Stewart

Jon Stewart is a researcher at the Institute of Philosophy at the Slovak Academy of Sciences. He has worked at universities and research institutes in Germany, Belgium, Hungary, Denmark, and the USA. He has published several books on 19th- and 20th-century Continental philosophy, including The Emergence of Subjectivity in the Ancient and Medieval W...