Brainy Girls, in Shakespeare’s Time and Ours 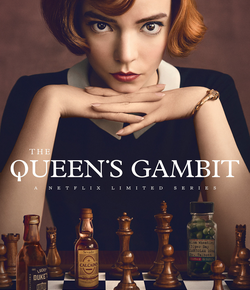 When Netflix released its limited series “The Queen’s Gambit” last year, who would have predicted that a show about a girl chess prodigy would reach the # 1 spot in 63 countries? The international success of the series (based on the 1983 novel by Walter Tevis) suggests that audiences across the globe were eager to cheer on Beth Harmon, an adolescent with an exceptional mind. Some of the most captivating scenes take us inside her head as she lies in bed, a chess board dangling from the ceiling, its pieces moving at a thrilling pace. Although Beth initially believes that it’s the drugs she’s been force-fed that are allowing her to focus, pills that she continues to take as she climbs the ladder of chess success, she ultimately triumphs over her addictions to win the Moscow Invitational. The show poster of Beth, staring at us with confidence over a chess board with booze and pills among its pieces, nods to her struggle, but also to her victory of mind over matter.

The show’s celebration of Beth’s cognitive gifts distinguishes it from a popular category of 21st-century teenage drama — one that features girls whose minds are disabled by their sexually maturing bodies and their uncontrollable, self-destructive tendencies. These tales of mental and physical crisis typically involve substance abuse, risky sexual behaviors, and parental despair.

Stories of fractious girlhood are nothing new. For as long as girls have been experiencing “the change of fourteen years” (as Juliet’s father, Capulet, describes puberty), families, institutions, and cultural norms —varied and intersectional to be sure— have tried to police female adolescence by casting it as a dangerous stage, one in which girls’ hearts and bodies get them into all kinds of trouble, while their brains take a backseat. Ophelia (so the common wisdom goes) loses her mind and kills herself because she has no one to watch over her: her father has been murdered, and her erstwhile boyfriend Hamlet has abandoned her, perhaps leaving her secretly pregnant. As Taylor Swift crooned in 2008: “When you’re fifteen and somebody tells you they love you / You’re gonna believe them.”

I started researching my book, Cognition and Girlhood in Shakespeare’s World, because this narrative about weak adolescent minds wasn’t jibing with what I was seeing, either then or now: widespread representations of teenage girls’ brainwork as agile, productive, and acknowledged. Yes, girls were being diagnosed by physicians with greensickness in the late sixteenth century—a condition believed to disable virgins’ bodies and minds, and whose “cure” was heterosexual intercourse (preferably with a husband). But did that mean that most people viewed teenage girls in this way? In many early modern plays, parents are the ones who declare their daughters to be greensick, while the girls themselves disprove this diagnosis. The audience knows that the secretly wedded and bedded Juliet is not the “green-sickness carrion” her father believes her to be, for example. They also have witnessed this almost-fourteen-year old girl’s deft brainwork as she strategizes how to achieve her freedom and desires.

As I show, medical writers described how girls’ bodies burst with heat when they experienced the changes that culminated in menarche, a process that early moderns generally keyed to age fourteen. This transformation appeared to activate girls’ principal mental faculties—imagination, understanding, and memory—in new, largely positive ways. Evidence of this dynamic cognitive movement animates depictions of female adolescence across all kinds of writings — not just medical texts, but philosophical treatises, parenting guides, prayers, poems, prose fiction, histories, plays, and autobiographical accounts. By mining representations of this changing brainwork across a variety of genres, I identify a particular vocabulary that early moderns used to endow adolescent girls with cognitive abilities that were distinct to this stage of girlhood.

Sofonisba Anguissola’s 1555 painting of her three sisters playing chess, and in particular the teenage Lucia who looks out at the viewer as she claims victory, transmits a message of cognitive control that pre-dates “The Queen’s Gambit” show poster by over 450 years. Fourteen-year-old Miranda also plays chess with her new husband in The Tempest’s final scene—the culmination, I argue, of what Shakespeare calls her “beating” brainwork. Girls can love, desire, and think all at the same time, often to great acclaim. In his popular 1624 Anatomy of Melancholy, Robert Burton revised the ancient story of the potter Dibutades’ daughter by crediting her with the invention of a new art form: “to comfort her self in [her lover’s] absence she took his picture with a coal upon the wall, as the candle gave the shadow . . . and it was the first picture that ever was made.”

In the intervening centuries, however, the dynamic, productive cognition that Shakespeare and his contemporaries recognized in adolescent girls receded from view, as notions of girlhood morphed to reflect the more restrictive gender codes and binaries of later eras. And along the way, the brainwork of Shakespeare’s teenage girl characters diminished as well. In 1851, Englishwoman Mary Cowden Clarke invented an Ophelia that reflected Victorian ideas about girls as pure, unthinking creatures in her Girlhood of Shakespeare’s Heroines: Hamlet’s “masculine intellect,” she wrote, “found repose in the contemplation of her artless mind.” Over the next hundred years, psychiatrists and Freudian-inclined literary critics made Ophelia the poster girl for their developing theories of female hysteria and the sexual chaos of adolescence. More recent adaptations of Ophelia, in East Asian film and elsewhere, have granted her more agency over her body, sexually and otherwise. In his 2004 play, The Al-Hamlet Summit, Anglo-Kuwaiti writer Sulayman Al-Bassam reimagined Ophelia as a fundamentalist suicide bomber to create his critique of Western and Arab political corruption and authoritarian abuses.

There is nothing inherently wrong, of course, with adapting a character to challenge or support a particular belief system. It is problematic, however, when particular renditions are passed on and taken up as universal truths. Psychologist Mary Pipher’s 1994 bestseller, Reviving Ophelia: Saving the Selves of Adolescent Girls, helped cement the relationship between explosive, dangerous girlhood and Shakespeare’s tragic heroine. Work like hers testifies to the endurance and marketability of this Ophelia, the one who is remembered for her uncontrolled, self-destructive tendencies, rather than her frequent acts of perception, artistry, and iron-clad memory in the play. “Where is the beauteous majesty of Denmark?” she asks when she first enters the play at the onset of her alleged madness. Everyone in the rotting state of Denmark seems to have forgotten why such a question matters. Is it so surprising that modern-day readers and viewers also miss its import?

Audiences have seemed to prefer their Ophelias unhinged, their Juliets impulsive, their Mirandas sheltered and naive. Meanwhile, the original, mentally industrious versions of these girls have remained out of sight. We tend not to recognize them, but also, and more importantly, we do not fully understand early modern girlhood – and this impacts perceptions of female adolescence and cognition today.

But this dominant view of girlhood may be changing—in part, because girls’ brainwork has become more visible in the past decade with the help of expanding, globalized networks. People across the world followed fifteen-year-old Malala Yousafzai’s story as she fought for female education in Pakistan, and then for her life when she was shot for speaking out in 2012; they witnessed Marjory Stoneman Douglas High School shooting survivor X González’s viral speeches in which they stood silent for six minutes and twenty seconds (the time it took the shooter to kill 17 people) and called “B.S.” on NRA-funded American politicians; they cheered on teenage Swedish environmental activist Greta Thunberg as she weaponized Donald Trump’s patronizing tweets about her, cleverly turning his words against him after he lost the 2020 election; and they learned this year that some justice was finally served in the case of George Floyd’s murder because seventeen-year-old Darnella Frazier had the forethought to record it, an act that allowed the world to see the truth about police brutality against Black Americans.

Perhaps audiences around the globe are ready to root for Beth Harmon, not because she is an anomaly, but because she finally looks familiar. Like Shakespeare’s original audiences, they simply recognize her.

About the Author: Caroline Bicks

Caroline Bicks (https://faculty.umaine.edu/carolinebicks/) is Professor and Stephen E. King Chair in Literature at the University of Maine. She is the author of Midwiving Subjects in Shakespeare's England (2003), the co-editor of The History of British Women's Writing, 1500-1610 (2010), and the co-author of Shakespeare, Not Stirred: Cocktails for Y...