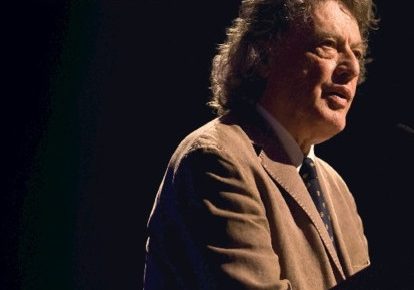 Tom Stoppard is one of the world’s most lauded and commercially successful playwrights, author of more than a dozen award-winning and profitable plays for the West End and Broadway. He has also been successful in film, co-writing the Oscar-winning screenplay Shakespeare in Love, and serving as a frequent script-doctor for Steven Spielberg and other Hollywood luminaries. The full scope of his achievement—and the extraordinary range of intellectual, political, and artistic fields in which he worked—is detailed in a new collection of essays, Tom Stoppard in Context, that provides a cultural matrix for his remarkable creative output.

Fascinatingly, Stoppard’s prolific output includes many projects that never saw the light of day. One of the many compelling stories revealed in Tom Stoppard in Context is how much energy and effort Stoppard put into films that were never made, all while maintaining a high-profile career as one of the world’s leading playwrights. This story is told in the 62 linear feet of file boxes, containing thousands of documents, in the Tom Stoppard Collection at the Harry Ransom Center at the University of Texas at Austin, which served as a key source for this collection of essays by a range of distinguished scholars of modern drama. Notes, drafts, contracts, and correspondence in the archive detail many fascinating film projects that were never completed.

Perhaps most interesting is the one film project that was not based on an existing literary or dramatic source: A.O.P. (Secret Service code for “Assault on the Principal”) about an assassination attempt on a US president, and the bodyguard whose job is to protect him from it. The would-be film (only an outline) explores Stoppard’s lifelong fascination with America, which doesn’t really feature otherwise in his published oeuvre.

Stoppard also wrote notes, treatments, and drafts for films of two classic modern plays: Bertolt Brecht’s Galileo and David Hare’s Knuckle. Though these were unproduced, traces of the effort Stoppard put into them may be seen in his own works; in the former case, in the science writing of plays like Hapgood, Arcadia and The Hard Problem, and in the latter, in the noir milieu of his screenplay for Raymond Chandler’s Poodle Springs. Stoppard wrote screenplays for two distinguished British novels of the late twentieth century. Innocent Blood by PD James was one of her rare stand-alone novels (not part of the detective series featuring Adam Dalgliesh or Cordelia Gray), and one of her most critically-acclaimed works. Hopeful Monsters, by Nicolas Mosley (son of British Fascist leader Oswald Mosley) was Whitbread Book of the Year in 1990; its mixture of science, history, and philosophy with a complex fictional story link it to Stoppard’s works of the period, yet in the end it was shelved by producers.

Stoppard’s most ambitious false start, perhaps, was for an animated version of Cats on which he worked with Andrew Lloyd Webber, Trevor Nunn, and Steven Spielberg. Stoppard wished to return the musical’s emphasis to the original T. S. Eliot poems, while opening out the narrative to a wider range of London scenes and actions. The HRC archive contains a wealth of material documenting this ill-fated project. Given the ridicule with which the eventual film was greeted, it may be as well that Stoppard stayed out of this one in the end.

Chapters by Rachel Joseph and Brice Ezell on Screenwriting, and by HRC curator Eric Colleary on Stoppard’s Archive, provide the background to these lost projects. Tom Stoppard in Context also provides many other unique perspectives into the works of this celebrated playwright and screenwriter. It includes over thirty essays covering Stoppard’s interests and influences, giving context for his life and career. A substantial section covers Stoppard’s political commitments and human rights work, and his relationship to his Czech homeland and Jewish heritage. The book’s broad approach highlights the range of Stoppard’s career in screenwriting, radio, television, journalism, and fiction.

About the Author: James N. Loehlin

James N. Loehlin is Shakespeare at Winedale Regents Professor of English at the University of Texas, Austin. His publications include Doctor Faustus (2015), The Cambridge Introduction to Chekhov (Cambridge, 2012), Henry IV (2008), Chekhov: The Cherry Orchard (Cambridge, 2010), Romeo and Juliet (Cambridge, 2002), and Henry V (1996)....