Bridging the Horizons: Paul and the White Privileged Church 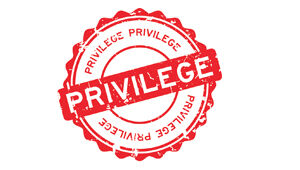 The discussion of privilege, especially, “white privilege” is a hot button subject that gets routinely discussed in news commentary, social media, in sociology classes, or anywhere where race is a presenting issue. For me as white male to address such a subject could be judged as potentially unwise since it is so easy to court offence on such an emotive topic. Yet I think Philippians 2 and 3 offers us some resources to address such a sensitive topic as racial relations and white privilege and what it means for the Christian churches, who see in Paul’s letter to the Philippians God’s word for them to read, mark, digest, and live out in community with others.

To begin with, I think it is exceedingly difficult to deny that being white does present itself with distinct privileges in most western environs. The way one is screened at an airport or treated by police in a roadside stop is generally different for whites and blacks. Added to that, in the USA, UK, and Australia, whites are more likely to go to college than blacks and blacks are more likely to experience incarceration than whites. Then one could compare life-expectancy rates or average incomes to see further disparities. It is demonstrably true then that white people enjoy certain privileges based on their skin colour and blacks experience certain disadvantages and discrimination because of theirs.

Of course, less we think that is all to say in the matter, there are three caveats we should make: (1) Privilege is in the end is still relative. Irrespective of what general advantages or disadvantages accrue because of one’s ethnicity they are still relative to the socio-economic status, family stability, educational setting, vocational opportunities, and place of origin that one is born into. One can be black and still experience relative advantages of prosperity and family stability just as one can be born into white rural poverty characterized by dysfunction and disadvantages. (2) Merely acknowledging white privilege does not end its negative effects on minorities. More often than not, acknowledging white privilege merely becomes a pretense to wield privilege in a paternalistic patronage over minorities. In other words, the solution to white privileges should not be a white savior complex. (3) My experience of listening to students of diverse backgrounds has taught me that racial, ethnic, and tribal prejudices are not limited to white cultures and they exist also among Asian, Arab, Latin American, and African peoples too. Cultures characterized by matrices of prejudice and power are sadly ubiquitous across the globe. White privilege is merely one version of the type of racial and ethnic inequalities that can be found in other parts of the world.

What does any of this have to do with Paul’s letter to the Philippians? Well, given Paul’s narrative of Christ divesting himself of the privilege of divine equality to become a servant, and given Paul’s own biographical description of how he divested himself of his Jewish privileges in order to know and gain Christ, what should our response be? What privileges are we called to set aside so that we can imitate Christ and Paul? For those of us who live in a multi-cultural and multi-racial context, we have an inevitable question that we must confront, namely, how does one live out the Spirit-created reality that in Christ there is neither black nor white, neither Asian nor Arab, but all one in Christ Jesus (Gal 3:28)? To be more specific, if Paul was among us now, and we gave him a crash course on the history of British empire and the United States, how might he react to the whole suite racial, cultural, and economic privileges that we often discuss?

As a modest proposal for an enormous topic, I would suggest that this requires, in the first instance, recognizing the historical factors that have shaped the present moment ranging including the heritage of slavery, segregation, patterns of immigration, the systematic exploitation of indigenous populations, and the history of civil rights and discrimination protections. Knowing the ugliness and the triumphs of our legacies pertaining to colonisation, race-relations, immigration, and legislation will help us to face the future. In the second instance, it entails discerning within the precincts of one’s own conscience how one can move beyond privilege to inclusion and equality, in both the church and within wider society.

A white majority church can divest itself of the privilege of race by: (1) empowering and listening to the voices of minorities who speak in the pulpit and public square so that their perspectives are acknowledged and acted upon; (2) recognizing that minorities have lived experience of alienation and disempowerment from which they can lead our churches when they feel alienated and disempowered from the majority culture; (3) moving beyond toleration and tokenism to apprehend an equality within churches pertaining to the opportunities for Christians of all kinds to exercise their spiritual gifts; (4) training and calling indigenous and ethnic leaders to lead white majority churches; and (5) ending all caste systems that create hierarchies of power and privilege based on ethnicity, nationality, tribe, language, in favour of an equality principle moored in the gospel of Jesus Christ.

In the end, however, the best thing white majority churches can do to divest themselves of their privileges is to implement the ecclesial corollaries that follow on from Paul’s remarks ruling out diastolē (“distinction”) between believers (Rom 3:22; 10:12) and prosōpolēmpsia (“favouritism”) before God and within the church (Rom 2:11; Gal 2:6; Eph 6:9; Col 3:25; 1 Tim 5:21). Paul’s gospel calls us to imitate Christ in his divestment of privilege with a view to serving others rather than consciously or unconsciously merely absorbing and baptizing the resident prejudices that we live among. That is at least part of what it means to have the mind of Christ Jesus (Phil 2:5).]

About the Author: Nijay K. Gupta

Nijay K. Gupta is Associate Professor of New Testament at Portland Seminary, Oregon. He has written commentaries on 1-2 Thessalonians and Colossians and is the author of Paul and the Language of Faith (2020). Together with Michael F. Bird, he is a co-founder and served as the first editors of the Journal for the Study of Paul and his Letters....

About the Author: Michael F. Bird

Michael F. Bird is Academic Dean and Lecturer in Theology at Ridley College, Melbourne. He is the author commentaries on Romans and Colossians, and the author of An Anomalous Jew: Paul among Jews, Greeks, and Romans (2016) and The Saving Righteousness of God (2007). Together with Nijay K. Gupta, he is a co-founder and served as the first editors of...