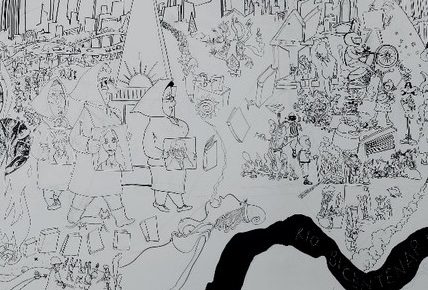 • How can we analyze the interaction of a social movement with the state, allies and antagonists without reducing the process only to its public and contentious dimensions?
• How can we put strategy making in a collective and historical perspective?

In my book The Poor’s Struggle for Political Incorporation, I show that the answer to these two questions resides on the existence of two types of repertoires. On the one hand, Charles Tilly’s famous “repertoire of contention”. This first repertoire is public and contentious. Moreover, as Tilly had said, it changes with the pace of glacial time eras.

However, this is not the whole story. I found that movements do much more than contentious politics when dealing with the state and other allies and antagonists. In addition, when I tried to see what it was happening when a contentious event was not happening, I found that I needed to conceptualize another repertoire of actions performed by this movement that the definition of repertoire of contention had intentionally excluded.

With the aim of solving this gap, I built a couple of concepts that would allow us to identify and conceptualize a huge portion of the interaction of social movements with the state that had been previously ignored due to an overemphasis on the contentious dimension. The concepts that I had elaborated for this purpose are the repertoire of strategies and the stock of legacies. These concepts do not replace Tilly’s repertoire of contention, but complement it. They allow explaining what was ignored by the previous concept.

By repertoire of strategies, I mean a historically constrained set of available options for non-teleological strategic action in public, semi-public (evolving across specific groups) or private arenas. With this concept, I am referring to the collection of strategies used by a social movement organization to achieve its main goals.

By stock of legacies, I mean the concatenation of past struggles, which, through the sedimentation of what is lived and perceived to be lived as well as what is intentionally learned, produces an accumulation of experience that adds or eliminates specific strategies from the repertoire of strategies as both a self-conscious and oblivious process. This means the accumulation of historical legacies that each collection of strategies is built upon.

The identification of a predominant repertoire of strategies during a specific historical period helps us trace in the analysis of social movement dynamics a couple of important things:

• It explains what occurs when the repertoire of contention is not happening, narrating a much more dynamic and rich process of strategic action than what the concept of repertoire of contention alone would have allowed describing.
• It favors an analysis of the internal complexity of a movement. Even though many times movements share a common repertoire of contention, the dynamic is different when observed the networked internal complexity of a movement. In many occasions, social movement organizations do not share a common repertoire of strategies, performing different strategies in the same situation, sometimes mutually learning, but in many other instances developing autonomous strategies that are a result of each social movement organization specific stock of legacies.

With this conceptual proposal, I am contributing to a historical and collective approach to strategy making and performing in politics.

About the Author: Federico M. Rossi

Federico M. Rossi, is a Humboldt Senior Fellow at the German Institute of Global and Area Studies (GIGA) in Hamburg and a Research Professor of CONICET at the School of Politics and Government of the National University of San Martín, Argentina. Rossi received his Ph.D. in Political and Social Sciences from the European University Institute in Flo...