The sixth and final volume of Irish Literature in Transition examines four decades of contemporary Irish writing and culture; it begins in 1980 and ends now, in 2020. These dates suggest one challenge of the contemporary: how can we reassess that which has only begun to be assessed? Per the charge of the series, we’ve identified emergent figures and influential works, looking past the clutter of rapid-fire digital patter, calculated marketing blurbs, and frenzied fandom to craft more distant, metabolized critical assessments of present-day cultural production. But the obvious question remains: how can this volume promise a nuanced, gimlet-eyed critique of the transitions of its own literary and cultural moment? While in its midst, the “contemporary” – as a period, as a category of analysis, as a descriptor – appears so ubiquitously transitional that locating any particular or permanent change seems impossible. How might this volume identify meaningful trends without lapsing into ungrounded prognostication?

Such challenges faced in any attempt to map the present moment are heightened by the dramatic social and cultural changes Ireland and Northern Ireland have experienced across these decades. In the 1980s, the Republic was plagued by recession and high outward emigration, Northern Ireland was mired in the Troubles’ nadir, and social and cultural life throughout the island was generally conservative and traditionalist. Twenty years later, at the dawn of a new century, the Irish economy was so strong that it had been labeled the “Celtic Tiger,” inward immigration outpaced emigration, the Good Friday Agreement promised an end of the large-scale violence of the Troubles, and Irish society became increasingly secular, thanks in no small part to the abuse scandals that rocked the Catholic Church. Today, the Irish economy that crashed at the start of the global economic crisis in 2008 has bolstered itself, the population of the island is increasingly racially and ethnically diverse, the electorate has spurred a series of remarkable and progressive social changes – and all await the consequences of Brexit.

The contributors to this volume recognize the risks inherent in making proclamations about the contemporary, but nonetheless gamely step into the breech. It turns out that in taking the measure of this most recent phase of Irish writing and cultural production, certain distinctive transitions and patterns surface to provide refrains that help us to hear better the breadth and complexity of contemporary Irish writing. We can identify, for example, the legacies of inward and outward migration and track the rise of a more overtly global Ireland; we can follow the altered representation of long-standing Irish themes like the land or religion across genres; we can explore the logics that explain the international attention awarded contemporary Irish writing and culture; we can identify the rich tension between tradition and innovation, seen for instance in the toggle between experimental writing and more familiar realist forms; we can understand better the crucial importance of genre fiction or new media forms on notions of literary value; we can witness the profound influence of changing notions of race, gender, class, ethnicity, and sexuality on literature and culture in Ireland. The essays in this volume range widely across the terrain of literary production on the island of Ireland to show how writers have reckoned with the demands of the present and to suggest possibilities for Irish writing’s future. 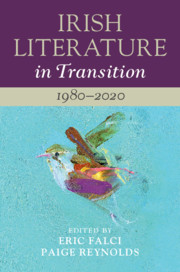 About the Author: Eric Falci

About the Author: Paige Reynolds

Paige Reynolds, Professor of English at College of the Holy Cross, Massachusetts, is the author of Modernism, Drama, and the Audience for Irish Spectacle (Cambridge, 2007) and editor of Modernist Afterlives in Irish Literature and Culture (2016). She has published essays on modernism, drama, and contemporary Irish writing and performance, and is ...