The Past is Never Dead: History and Power in Ancient China

In ancient China, the past was ubiquitous. In the thousands of texts that have survived, between the commemorative inscriptions of the Bronze Age elite, the gnomic sayings of Confucius, and the pronouncements of the emperors, invocations of the past abound. Some merely gesture towards it, ever so lightly, while others would delve deeply into it. Reading through the ancient Chinese corpus is, therefore, akin to wandering in a vast landscape of the past. Not our past, of course, but their past, scattered across this plethora of ancient texts. It’s a curiously persistent backward gaze, and it pervades almost the entirety of the literary remains of early China of the first millennium BCE.

My new book The Politics of the Past in Early China is a study of the history of this landscape of the past in early China. Much ink has already been spilled on this subject, actually, by past generations of scholars. In much of this fine body of scholarship from the last decades, there is a strong desire to explain this looming presence of the past in early Chinese texts as a matter of deep-seated cultural orientation or intellectual habit. These ancient texts are unusually historically-minded because the people who wrote them supposedly revered the past as a matter of attitude, especially for its didactic potential for the present. In this new study, I am hoping to pivot away from this culturalist preoccupation towards a more sternly historical approach, one that sees these narratives about the past not as passive vocalizations of cultural norms but as deliberate responses to competing voices under changing historical circumstances. This vast landscape of the past did not simply just exist somehow, but rather, it arose very gradually out of opposing ideological forces that mobilized the past as argumentative capital in a great variety of ways.

More specifically, I am interested in the implication of the past in the contentious debates over political matters in early China. As the Bronze Age aristocracy fell to ruins and great empires began to rise, fierce debates raged over what constituted proper governance. Time and again, we find the political elite turning to the field of the past for potent ideological materials. To work out the relations of power in the present, they found great power in the remembrances and articulations of times past. In this study, we see the many different ways that the past was mobilized in the imagination of power among the political elite of early China; there was the genealogical past of the Bronze Age elite, cultural past of the Confucian Analects, etiological past of the Mozi, cosmogonic musings of the Guodian Laozi, and political amnesia under the Qin empire, to name just a few examples. It was a most protean thing, the very idea of the past, that can be variously dissembled or assembled to serve multitudinous ideological ends.

“The past is never dead. It is not even past.” Faulkner, like many writers from the long twentieth century, tried to work out the atrocious, insidious legacy of the past in the present. “History is a nightmare from which I am trying to awake,” as Joyce once famously said through his Ulyssess protagonist. In ancient China, we find a similarly backward gaze throughout the intellectual landscape, but it was not one of angst and misery. History was not this mirror of our own unfreedom in the present, but rather a project of infinite hope. Across the different dialogues and debates that I reconstructed in The Politics of the Past in Early China, we see how the early Chinese political elite rummaged through the expansive field of the past in search for ideological tokens that can lend support to their powerful visions of the world — how it came to be and also how it should be in the future. The past was never dead, too, in early China, not for its stubborn persistence, but for it being disinterred time and again to participate in the order of the present. 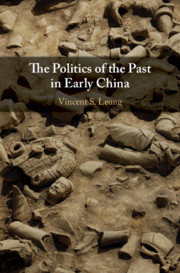 The Politics of the Past in Early China by Vincent S. Leung

About the Author: Vincent S Leung

Why are there reeducation camps for...