Milton and the Burden of Freedom

What I’ve found in teaching Milton is that an author, whom students at first think of as inaccessible, because his poems are full of Biblical and classical references, familiar to his initial readers but much less so today, turns out unexpectedly to be imaginatively and intellectually stimulating, a pleasure to read and to talk about.

At the time I am writing this blog, His Dark Materials is on every week on TV, and there is a Blake exhibition at Tate Britain. Philip Pullman and Blake illustrate how much Milton and his characters and ideas can inspire new interpretations, and how alive and how problematical the idea of freedom, and everything it entails, can be in dark times.

Milton and the Burden of Freedom, which considers Milton’s works, poems and prose writings, throughout his career, relating them to their historical context, emphasizes their internal contradictions, many of them inherent in his conception of liberty.  In all these writings, Milton, deeply engaged in political and theological controversy, sought to clear a space for human freedom in a world ruled by an omniscient and omnipotent deity. Paradise Lost and Samson Agonistes, as well as such prose works as Areopagitica and The Readie and Easie Way, explore the problematical aspects of a universe ruled by an Old Testament God of wrath, demanding obedience, who allows his creatures the freedom to be ‘authors’ of their own fate.

Milton, whose writings are rooted in the Reformed tradition while challenging Calvinist orthodoxy, is both radical and conservative in his political and religious beliefs. In this book I trace the evolution of Milton’s attitude toward freedom and servitude during a century of political upheaval and disappointed hopes, as expressed in a number of powerful, imaginatively stimulating works. The book is interdisciplinary in its approach, and I hope it will appeal to those interested in 17th-century history, literature, political theory, and theology, as well as to the general reader. 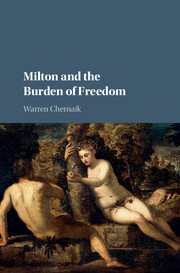 Milton and the Burden of Freedom by Warren Chernaik