In this book, Cathy Willermet and Sang-Hee Lee reflect that the “steadfast obsession with the scientific approach that characterized biological anthropology, like no other subfield in American anthropology, is in fact a response to mask the dark history surrounding its birth”.

There is a timely lively back and forth all taking place on the internet, across venues of the traditional academia, public academia  and social media. The topics, the nuances, the charges are not new, but rather a new version of the old. I can trace it back to C.P. Snow’s Two Cultures. Surely there are colleagues with a deeper well of wisdom who can trace the genealogy much farther than the prehistoric 1960s.

I am embarrassed. The jeering and snarky put-downs that chastise historians who “historicize everything” and mock “other ways of knowing” as “navel-gazing” are strangely familiar. I am embarrassed because I recognize my own self in graduate school, almost 30 years ago.

In our volume, Cathy and I reflect that the “steadfast obsession with the scientific approach that characterized biological anthropology, like no other subfield in American anthropology, is in fact a response to mask the dark history surrounding its birth”. Obsession with a particular kind of science shielded our field from asking critical questions. We can no longer afford to pretend not to notice. We probe the very foundations that we safely took, that gave us a false sense of protection from asking uncomfortable questions about the political and historical contexts that form our data, that threaten to make our data impure.

Concepts such as explicit and implicit biases, privileges, and power can be strange from the tradition of scientific objectivity. We argue that we move forward by making those very strange concepts familiar. The contributors of our volume interweave our past and present, and point to the future of biological anthropology. We critically examine our familiar thinking. We creatively evaluate our evidence and analytical techniques. By doing so, we believe we endorse the current trend in our field in inviting new perspectives and voices. We do not shy away from questioning our basic assumptions about our research questions. We offer to go forward, critically. 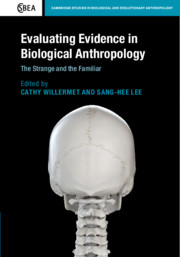 About the Author: Cathy Willermet

About the Author: Sang-Hee Lee

Sang-Hee Lee is Professor of Anthropology at the University of California Riverside, and a fellow of the American Association for the Advancement of Science (AAAS). Her book Close Encounters with Humankind (2018) won an American Anthropological Association (AAA) book award....