Who will date a trans person? – Karen L. Blair

Who will date a trans person?

In a recent study published in the Journal of Social and Personal Relationships, 87.5% of the participants chose only cisgender people and excluded transgender and non-binary individuals from their hypothetical dating pool. This blog, written by chapter author of 'The Intimate Relationships of Sexual and Gender Minorities' from The Cambridge Handbook of Personal Relationships, 2E, looks at why...

Regardless of your current relationship status, imagine for a moment that at some point in the future you were to find yourself single and looking. Under such hypothetical circumstances, which of the following people would you consider as a potential dating partner:

In a recent study published in the Journal of Social and Personal Relationships, 87.5% of the participants who were asked this same question only chose the cisgender options and excluded transgender and non-binary individuals from their hypothetical dating pool. At the same time, we know that romantic relationships are some of the most important sources of social support that we receive in our life time, and that these relationships contribute greatly to our overall well-being, including how happy we are, how often we get sick, and ultimately, how long we live.

What then, does this mean for trans people’s overall well-being if the majority of people within society won’t even consider them as potential dating partners under hypothetical conditions? A lack of social support could contribute to some of the existing discrepancies in mental and physical well-being within trans communities. However, despite the fact that most participants were unwilling to consider dating a trans person, there were certain demographic characteristics that were associated with more inclusion of potential trans partners. For example, while only 3.1% of cisgender, heterosexual individuals were willing to date a trans person, 55% of individuals who identified as queer or bisexual included trans persons as potential dating partners, perhaps due to their pre-existing ability to look beyond gender when choosing a partner.

Ultimately, each individual has the freedom to decide whom they date or are interested in dating, and thus the article does not suggest that any single individual must include trans people within their dating pool. However, the article does suggest that examining and following the overall societal patterns of including or excluding trans people within the intimate realm of dating can be used as an indicator of overall acceptance and social inclusion of trans people. In other words, it is one thing to make space for trans people within our workplaces, schools, washrooms, and public spaces, but it is another to see them included within our families and most intimate of spaces, our romantic relationships. We won’t be able to say, as a society, that we are accepting of trans citizens until they are also included within our prospective dating pools; at the very least, on a hypothetical basis.

To learn more about this study or other research on the relationships of sexual and gender minorities, see ‘The Intimate Relationships of Sexual and Gender Minorities‘ from The Cambridge Handbook of Personal Relationships, 2E, which will be free to access throughout June as part of our Pride Month campaign.

Blair, K. L., & Hoskin, R. A. (2019). Transgender exclusion from the world of dating: Patterns of acceptance and rejection of hypothetical trans dating partners as a function of sexual and gender identity. Journal of Social and Personal Relationships, 36(7), 2074-2095. 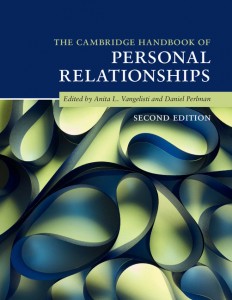 About the Author: Karen L Blair