Is Brexit a ‘crusade’?

The political and economic agenda of the United Kingdom has been dominated for the last two years by the result of the 2016 Brexit referendum. A few days after the referendum, in which 52% of voters voted to leave the European Union, the Islamic State organisation praised Brexit for destabilising ‘crusader Europe’. ISIS represented a united Europe as a ‘crusader Europe’, and, according to its argument, Brexit threatened to break-up this pan-European enemy of Islam. Such a view sees a united Europe as a Christian and expansionist Europe, threatening the then-powerful Islamic State and its own ambitions of territorial and ideological expansion.

Yet, in the period since the Brexit referendum, the language of crusade has been more frequently applied to pro-Brexiteers. For example, Jacob Rees-Mogg MP has been described as a ‘crusading Brexiteer’ by the Daily Express. The Irish Times wrote that a ‘misplaced sense of superiority and entitlement underpins Brexit crusade.’ In a piece on Nigel Farage MEP, The Scotsman described ‘the almighty mess his Brexit crusade has created’; Farage himself then quit the UK Independence Party over its focus on British Muslims, saying that ‘UKIP wasn’t founded to be a party fighting a religious crusade’ against Islam. And recently Open Democracy called on the DUP, which supports Theresa May’s minority government, ‘to ditch its Brexit crusade and wake up to Northern Ireland’s real issues.’ On the other side of the Brexit divide, the Liberal Democrat Vince Cable MP recently urged his party members to lead a “crusade” to liberate Britain from the “Brexit nightmare.”

ISIS thinks Europe is a crusader entity, Remainers think Brexiteers are crusaders, and a leading Remainer wants a crusade against the crusaders…So what is a crusade, and can we characterise Brexit as a crusade, one way or another? When we characterise something as a crusade, we are usually not thinking literally of “A military expedition undertaken by the Christians of Europe in the 11th, 12th, and 13th centuries to recover the Holy Land from the Muslims”, to use the OED definition. At the same time, we do use the word to imply something beyond an argument, akin to the OED’s alternative definition, ‘An aggressive movement or enterprise against some public evil, or some institution or class of persons considered as evil.’ This second definition nicely picks up on the rancorous rhetoric and the zealous terms of good versus evil that have characterised public discourse about Brexit in the UK.

In The Cambridge Companion to the Literature of the Crusades, which I edited and was published last week, the definition of a crusade remains similarly elusive. I offer a working definition of a crusade as “a military campaign inspired by faith or piety” or, to put it another way, “a militarised pilgrimage” (p. 1), but this is at best a partial definition. As the essays in the volume show, from twelfth-century chronicles to recent Hollywood films, what a crusade is remains very much up for grabs. However, to crusade is rarely a morally or ideologically neutral act: from the Middle Ages onwards the word carries within it idealism and romance but also violence and fanaticism.

In November 2017 the BBC’s The Apprentice TV show featured one pair of young entrepreneurs, Bushra and Sarah, unsuccessfully trying to develop a recipe kit called ‘Gourmet Crusaders.’ Sarah, who suggested the brand name, seemed unaware of the term’s negative connotations, and said that to crusade is ‘a call to action’, ‘to stomp, to walk around, to travel, to explore.’ Bushra, conversely, saw that the name evoked ‘an army, a fight, like a battle’; ‘it’s about war’, she said. Lord Alan Sugar regarded the use of the term ‘crusader’ as one of the reasons why the team’s business failed; the name ‘implied that the team was going to war’. This moment showed the centrality of crusading to public discourse, but also the fact that its definition is unfixed. The rhetorical presence of crusading is fundamental to Western culture, but, as the representation of Brexit as a crusade suggests, its definition depends on what we want our crusaders to be. 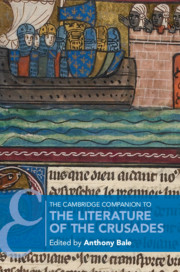 About the Author: Anthony Bale