My previous blog summarised the orthodox argument why adverse selection in insurance is a bad thing. This present blog gives the counter-argument from my book Loss Coverage: Why Insurance Works Better with Some Adverse Selection.

In essence, the counter-argument relies only on simple arithmetic, and can be illustrated by a toy example. 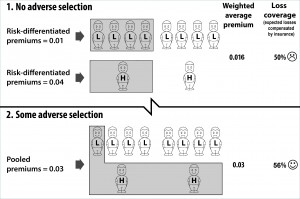 In Scenario 2, risk classification is banned, and so insurers have to charge a common ‘pooled’ premium to both higher and lower risks. Higher risks buy more insurance, and lower risks buy less. The shading shows that three risks (compared with five previously) are now covered. The pooled premium is set as the weighted average of the true risks, so that expected profits on low risks exactly offset expected losses on high risks. This weighted average premium is (1 x 0.01 +2 x 0.04)/3 = 0.03.

I argue that Scenario 2, with a higher expected fraction of the population’s losses compensated by insurance, is superior from a social viewpoint to Scenario 1. The superiority of Scenario 2 arises not despite adverse selection, but because of adverse selection.

Some astute readers may have noticed that if the adverse selection progresses beyond Scenario 2 to its logical extreme, so that only a single higher risk remains insured, then loss coverage will be lower than with no adverse selection. This point is considered further in the book. For now, I merely reiterate that my message is one of moderation: I say that insurance works better with some adverse selection, not with any amount of adverse selection.

About the Author: Guy Thomas

Guy Thomas is an actuary and investor, and an honorary lecturer at the University of Kent, Canterbury. His academic publications have received prizes from the Institute and Faculty of Actuaries and the International Actuarial Association. He is also the author of Free Capital: How Twelve Private Investors Made Millions in the Stock Market...

What the arts has to offer...