Stuart Sillars on the Visual in Shakespeare

Stuart Sillars, author of Shakespeare and the Visual Imagination, examines how concepts in visual art are portrayed in Shakespeare’s plays and poetry, from the Reclining Venus in A Midsummer Night’s Dream to the emblematic depiction of Lavinia in Titus Andronicus.

You can also find out more about Stuart Sillars’ books on his collection page.

It’s time we started to take Shakespeare seriously. Not as the inventor of human character, nor as the dramatist who cleverly foresaw the ideas of Bourdieu, Žižek or the current literary saviour-of-the-month, nor as the writer of plays best set in Albanian brothels to the soundtrack of 1950s popular music; but as a major intellect engaging with European concepts, debates and practices of visual art by which he was surrounded, translating them into dynamic movements wholly literary and theatric.

The movement is there right from the start of the canon. Venus and Adonis has one of the most incisive statements of the friction between art and life in the account of his ‘trampling courser’, enfolded into a geometrically ordered structure that builds on arguably the most represented story in sixteenth century visual art. And it’s also very funny. Lucrece explores the whole idea of perspective-as-reality-and-deception, but folds this into not a mere description of an image but a central figure’s reading of it. For perspective, look at Sonnet 24 – ‘perspective it is best painter’s art’ – which uses the technical term, perhaps for the first time in English, doing so in arguably four different senses, weaving it into the already familiar form of the sonnet. All these don’t just demonstrate knowledge; each one offers lexical richness in seamless integration with the idea, genre and structure of the text in which it appears. Oh, and the two poems work as a literary diptych, mirroring a form common in renaissance devotional art.

Later on, the uses of visual concepts and structures multiply and develop, alongside the long series of variations – think Goldberg – in which the canon plays with ideas of tragedy and – arguably more finely – Italian comedy.  Love’s Labour’s Lost is a series of versions of the rule of three in visual art and rhetoric; Richard II plays repeatedly with the structure of the Wilton Diptych; A Midsummer Night’s Dream parodies the tradition of Reclining Venus images as powerfully as it does the clichés of earlier, but still remembered, native mother wits.

Read thus, the plays become far, far richer, and a lot of their problems are – well, not erased, but moved to a higher level of debate. The Shrew makes far more sense when seen as a metatheatric discussion, made sense of only via the ‘lewd pictures’ shown to Sly in the Induction, so that the final scene is both a parody of Italian comedic resolution and something troubling within its surface meaning. 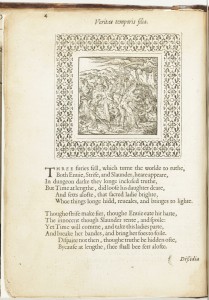 Titus’ lament before the lacerated figure of Lavinia is not to be rejected because he offers no help – that’s as daft as asking why Millais didn’t jump into the water to save the drowning Ophelia.  What’s going on here is the theatric embodiment of the well-established structure of the emblem, with the ‘consuming sorrow’ of Marcus the inscriptio or short descriptive heading, Titus’ long speech the subscriptio, or narrative reflection, and Lavinia herself the static, visual component or pictura. It’s a dazzling absorption of the form into the dynamic of theatre, which works so well because it uses the static nature of the emblem form to reveal the impossibility of coming to terms with the human outrage presented.

Near the close of The Winter’s Tale, there is the mention of Giulio Romano. Shakespeare didn’t just get it wrong. Anyone who has actually looked at Giulio’s frescos in the Palazzo Te and elsewhere will recognise him as a master of trompe l’oeil, presenting vividly sculptural forms on flat surfaces, powerfully convincing as well as dazzling in their skill. Not just a clue to what happens later; this is a metaphor of the whole way in which the plays work.

Before you ask, no; I’m not interested in proving that Shakespeare saw all these images. That’s for biographers and historical novelists – increasingly, with regard to Shakespeare, very much the same thing – to play with. What matters is not where ideas came from, but where they go. It’s the words and actions that reveal all of this, and strengthen the way we read and perform the plays – and also allow us to see Shakespeare as the major European aesthetic philosopher that has been so long obscured.

About the Author: Stuart Sillars

What have fish to do with Gothic...

What have fish to do with Gothic...