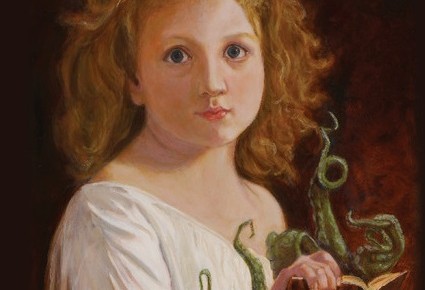 Writing a book with a title like Children’s Fantasy Literature, even when you make it clear that it’s merely an Introduction, is a daunting task. Farah and I knew from day one that we were going to annoy people by leaving out a significant number of their favorite children’s books and authors. We also knew that there was no way to fix this short of writing a book three times our allotted length. There’s just too much good stuff to choose from, even when you’re intentionally excluding poetry, film, and graphic novels, and mostly limiting yourself to the English language tradition. We tried to deal with this problem by including the widest possible coverage of children’s fantasy fiction combined with a deeper focus on the writers we thought were either the most consequential or, in some cases, the most typical.

Neither of us is comfortable with the legitimacy of the so-called Intentional Fallacy or the supposed illegitimacy of biographical criticism; for us what a writer intended and where that writer is coming from in terms of her biography and her cultural heritage is vitally important. So too is where readers come from and how and whether those readers see themselves in a text (although we hesitate at the assumption “identification with” is a requirement). So we also set ourselves the goal to show you all the new and fantastic writers of color who have entered the field. Many of these children’s writers of color simply aren’t as well-known as they should be in the children’s literature community and we want our inclusion of them in a volume such as this one to cement them in the (admittedly very large) canon and make them easily visible to those selecting books for public bookshelves and courses.

So, who are the writers of color whom we’ve devoted time to? Among my personal favorites are the great African-American children’s writer Virginia Hamilton and particularly her novel Sweet Whispers, Brother Rush, the Caribbean-Canadian writer Nalo Hopkinson and her The Chaos, Chinese-American novelist Laurence Yep and his City of Fire (and other fantasies too numerous to mention), and the Nigerian-American fantasist Nnedi Okorafor and her Zarah the Windseeker. A partial list of other children’s writers of color discussed would include Jerry Pinkney, Hiromi Goto, Joseph Bruchac, Linda Sue Park, Paul Yee, Rebecca Lim, Sarwat Chadda, Jamila Gavin, Grace Lin, Rhiannon Lassiter, Malinda Lo, Helen Oyeyemi, and Vandana Singh.

Farah and I hope that you will find this to be just one worthwhile aspect of Children’s Fantasy Literature: An Introduction.

About the Author: Michael Levy

Michael Levy is Professor of English at the University of Wisconsin, Stout. He is the author of Natalie Babbitt (1991) and Portrayal of Southeast Asian Refugees in Recent American Children's Books (2000), editor of The Moon Pool by A. Merritt (2004), and co-editor of the peer-reviewed journal Extrapolation. Levy was awarded the Clareson Award for D...