Ritu Gairola Khanduri, author of Caricaturing Culture in India (2014), examines the work of R. K. Laxman in the first of three posts.

R. K. Laxman, the doyen of Indian cartooning, passed away last year on January 26—the day also celebrated with much aplomb as India’s Republic Day. 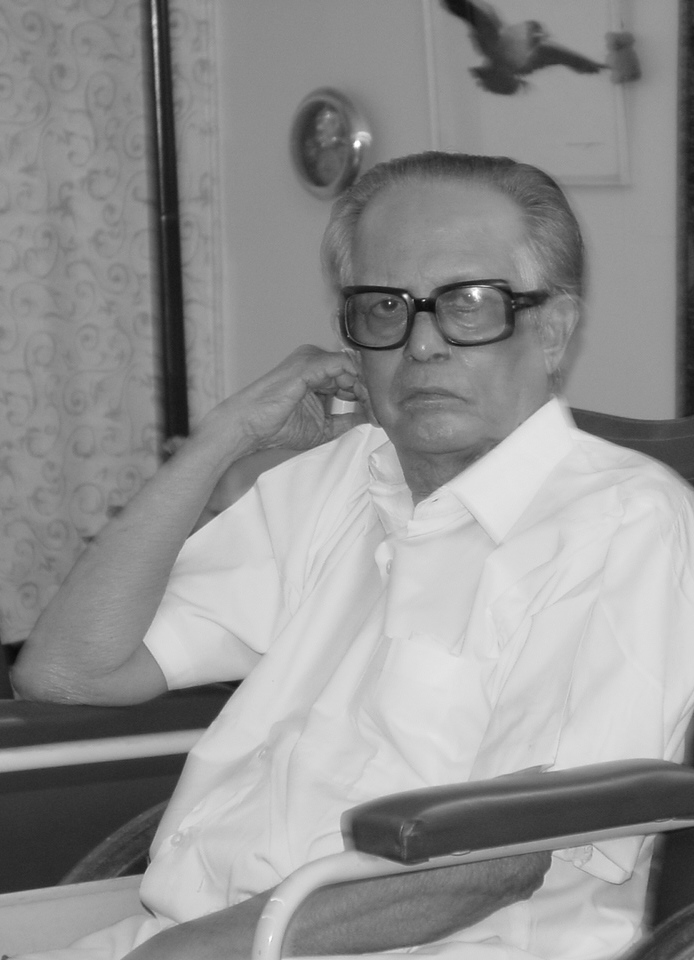 On that day confronted by the optimism of the new government’s promise of acche din (good days) and cartoonist Laxman’s demise, the people of India may have felt compelled to see India’s future and Laxman’s cartoons in a double vision. Optimism and loss may have left many speechless, and thoughtful, becoming of Laxman’s common man character.

Readers of the Times of India and Laxman’s fans are all too familiar with the quiet, observant demeanor of his common man. The bespectacled plaid jacket and dhoti– donning denizen appeared in the Times of India’s big cartoons and trademark pocket cartoon series, “You said it.”

Now set in stone, as sculptures facing the Arabian Sea in Mumbai’s shoreline (and at the Symbiosis Institute in Pune), Laxman’s common man has braved half a century of India’s bitter and sweet times. 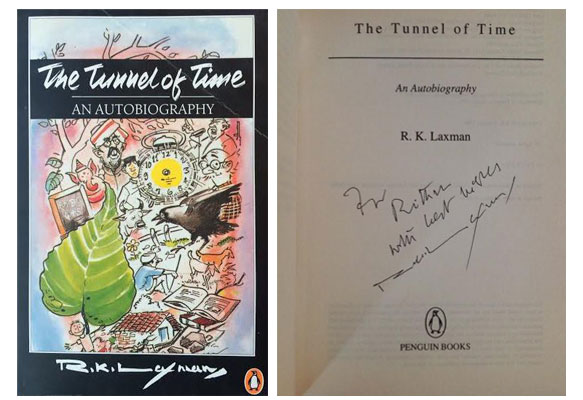 For a man precise about his art, he winced at the expectation to recall dates.

“I avoid the bother of finding out dates…how is it important?” he asked, signing my copy when I puzzled that his autobiography was a life story without dates.

I first met Laxman in 2003, at his residence in Warden Road, in Mumbai. He was recovering from a stroke.

He showed me around his living room. We looked at the trophies he’d been awarded and the sketches adorning the walls. He challenged me to count the number of crows in one of the sketches.

Against this defiance of time and tidiness, publishers and editors have accorded Laxman’s corpus some structure.

His cartoons have been curated to narrate the history of India. 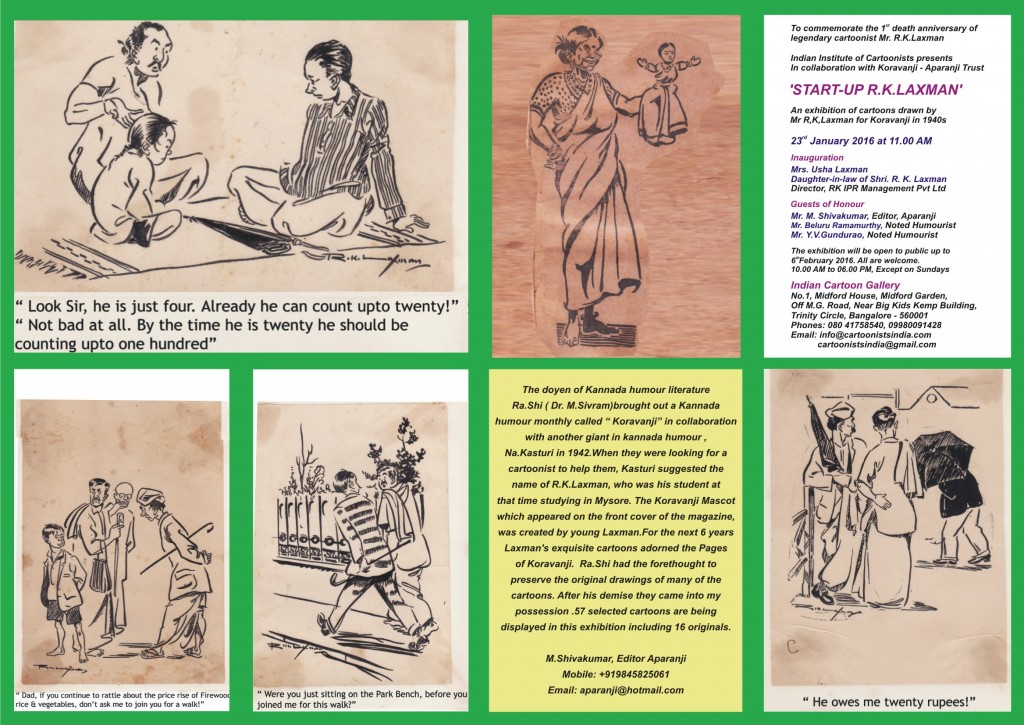 Flyer for exhibit of Laxman’s earliest cartoons, which were published in the Kannada language magazine, Koravanji. 2015.

His majestic front-page three-column cartoons, one-column pocket cartoons from the “You said it” series, numerous caricatures that brightened the Times of India’s Sunday pages, early-career cartoons for Koravanji and the Free Press Journal in 1947, the year of the Partition make a hefty archive.

During my research I noticed some cartoons also appeared in the famous Shankar’s Weekly.

Over the years, several plush volumes and pocket editions of Laxman’s cartoons have allowed the public to see the prolific cartoonist’s work in color and in generous dimensions.

For social elites, Laxman’s caricatures added to their opulence.

His caricatures grace the walls of places the well-heeled visit. The Taj Group of Hotels in New Delhi and Mumbai is among them.

His rendering of Bollywood superstar Nargis was a treat. He fretted over the impossibility of capturing handsome looks. Madhubala—India’s heart throb, seemed to have posed him a challenge on this account. So did Prime Minister Rajiv Gandhi, though in this instance Laxman prevailed. 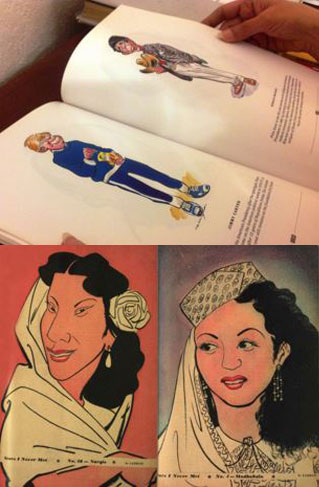 Generations that follow will not be wanting in access to Laxman’s oeuvre. His cartoons crossed Indian shores. They were often published in the New York Times as critical perspective on India-related news of the day.

Through scenes of home, street, administrative offices, laboratories and villages, Laxman’s cartoons portray the realm of politics in everyday life in India. With almost six decades of observing and caricaturing in the field, Laxman’s view of democracy and bureaucracy outsmarted all literal renderings of changing power regimes.

His cartoons show the rough and tumble of democracy. They picture how democracy dispenses with the poor and common people. Laxman’s cartoons minced no words in exposing how developmental agendas assured collateral damage. He rebuked politicians, bureaucrats and experts of all persuasions.

In turn, they developed a thick skin and feted him with the Padma Vibhushan and Padma Bhushan—the nation’s highest civilian awards. The sting of Laxman’s cartoons is a striking contrast to the poetry and images in Tamil newspapers that result in the “aestheticization of the state” and attribute divinity to the politician (Bate 2009). In Laxman’s cartoons, the inept political mortals are fatal accidents of democracy. They die. They are reborn. No nirvana. No shrines.

Witness his scores of cartoons on the airplane—a metaphor for the development of under development, excess, corruption and flight from reason. 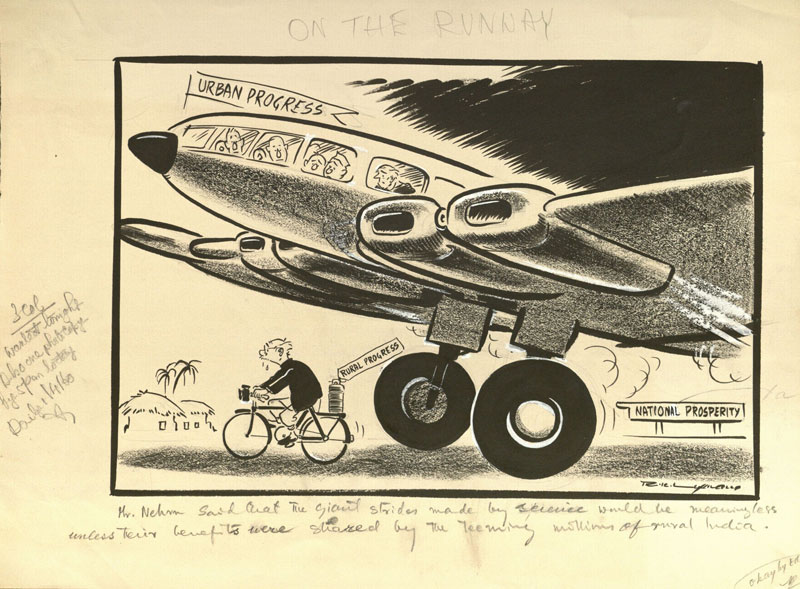 With such attention to detail and political patterns, Laxman’s cartoons are a view from below that could be the envy of cultural anthropologists and Marxist historians. They could serve as a template for “subaltern talk.”

Anthropologists of the state and democracy, and all who study politics, could doff their hat to Laxman’s prescient cartoons. In recent studies, anthropologists have shown how democracy, bureaucracy and policy are best understood on the ground, by engaging people’s experience.

This is the stuff of ethnographic research—it moves beyond  textual sources toward understanding politics by listening to and observing people’s lived experience. Make no mistake. Laxman was not the common man. He was the ethnographer and chronicler of the common man. 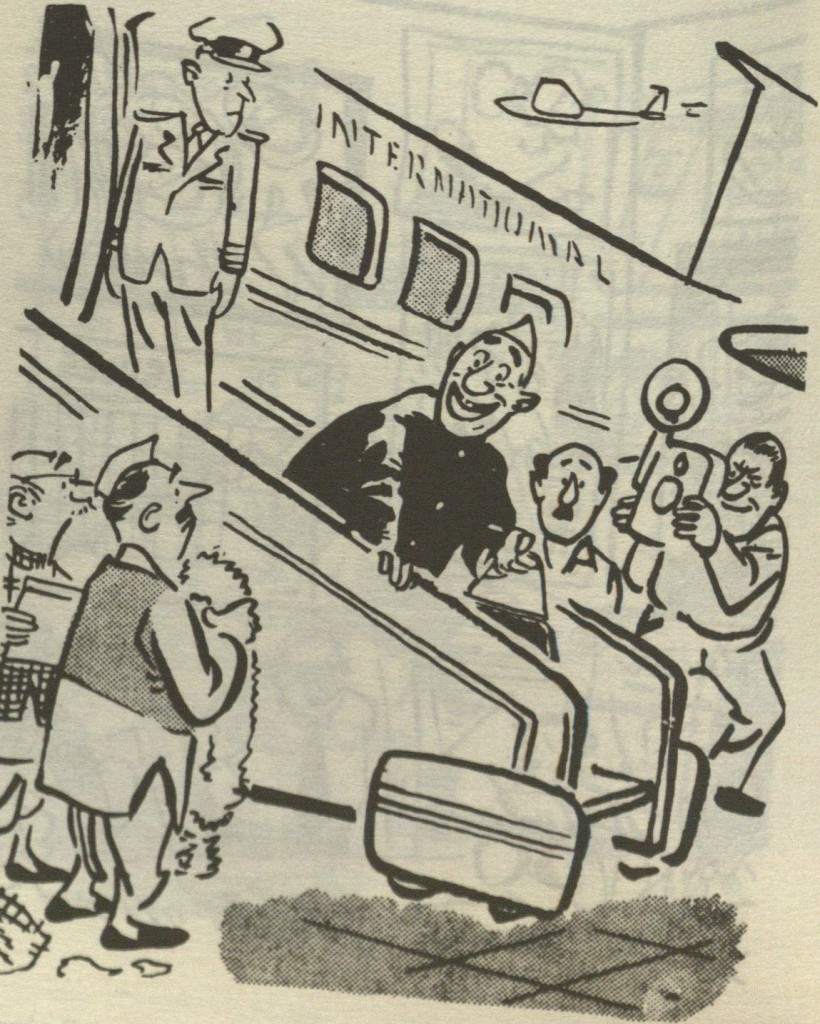 Long before newspapers caught the ethnographer’s eye for good, the anthropologically inclined political scientist Benedict Anderson, author of Imagined Communities, began to ponder newspaper cartoons as symbolic speech in political communication. In late 1972, under unexpected circumstances in Indonesia—he was held up by the immigration service and military intelligence—Anderson found himself examining ephemeral materials such as comic books, films and cartoons during this “enforced leisure.” For Anderson, not merely the content but the form of the cartoon—distribution of light and dark, the characters, and use of space was crucial for interpreting the cartoon’s message.

To appreciate the cartoon’s role in forming a modern collective consciousness, he sought to look beyond its obvious “lampooning instinct.” Anderson made a case for the significance of cartoons in political contexts where the public had access to modern political communication but did not have “political muscle.”

A few years later, in Pune (a city near Mumbai), under restrictive circumstances of the Emergency in India (1975-1977), anthropologist G. S. Ghurye used newspapers and included Laxman’s cartoons as source for his fieldnotes to research India’s democracy. For Ghurye “the cartoonist saw deeper and put up the true import more correctly” (1978: 41).

Caricature and cartoons are not simply raw material.

Years after Anderson and Ghurye’s acknowledgment of cartoons, belatedly, but surely, anthropologists embraced the newspaper (and with it the cartoon) as ethnographic source and perspective. Recognizing the “zones between anthropology and journalism” has also helped endorse newspaper cartoons as ethnographic material.

There is more than meets the eye. Debates on fact, truths and realism should turn to the poetics and politics of caricature and cartoon. Caricature provides the key to the elusive realism authors and artists have agonized over.

Laxman was often asked how he came to Mumbai and became a cartoonist, far from his hometown in Mysore. In one of these early interviews, Laxman presented himself as “the Universal Man.”

In 1947 when he got down at Bombay Central, the Railway Station, and took a Victoria—a four-wheeled horse-drawn carriage, after some brisk riding there was a hurried and tense switch of drivers. The exchange between the Muslim driver and Hindu drivers occurred at the point where a “Muslim locality” ended and a “Hindu locality” began. Laxman recalled that day in Bombay: “I was the universal man, neither Muslim nor Hindu—a mere commodity.”[2]

Soon after reaching Bombay, Laxman picked a few assignments and his week-long visit unexpectedly became permanent.[3] He began making cartoons for the Free Press Journal. There cartoonist-politician, founder of Shiv Sena, Bal Thackeray, was among his colleagues.

The author saw Laxman’s cartoon in the Free Press Journal in the Library of Congress, DC .

Decades later, Laxman’s common man was commodified. He became the mascot and brand ambassador of a low-budget airline, Air Deccan.

When I met with Captain Gopinath to learn about his airline’s advertising campaign, he showed me a cutting of Laxman’s cartoon. The cartoon mocked pretentious elites fearful of rubbing shoulders with their lesser co-passengers in low-budget airlines. Such snobbery in the air inspired Gopinath’s choice of brand ambassador.

This “You Said It” cartoon inspired Air Deccan’s Captain Gopinath to pick the common man as brand ambassador for his airline. Source: The Times of India.

Beginning in 2002, during my travels in India, to meet cartoonists and visit archives for my research on cartooning, no conversation was complete without reference to Laxman.

Reverence. Adoration. Fear. Dropping Laxman’s name could invite any or all these reactions in a single breath. Admirers heaped praise pointing to his inimitable style and long innings in the profession. His common man character, and Laxman himself, had become the face of the Times of India—one of India’s leading newspapers.

In a nation rich in cartoonists, Laxman’s career was enviable and unique—his success and stardom paralleled Bollywood singer Lata Mangeshkar and movie star Amitabh Bachchan. Critics balked, tired of his unchanging drawing technique and tropes in which they couldn’t recognize the India they habited. Still others groaned at the predictability of his humor and how it robbed the cartoon of punch lines.

One of my favorite cartoonists, and a man of many talents, Rajinder Puri, offered an insider’s perspective on Laxman’s style: “he did not  appreciate the limitations of space…his captions were too long, often self-explanatory.” I couldn’t agree more. Puri’s critique shows us how Laxman’s busy cartoon, paradoxically, compromised the aspect he most prided: graphic quality. However, Laxman’s big editorial cartoons did not always suffer these pitfalls. 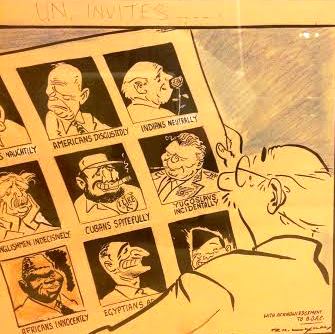 His original cartoons were artwork (pictured right). When published within three columns, they lost some luster.

Other thoughtful appraisals have faulted Laxman for not elevating the political tenor of his cartoons. These are valid criticisms. Yet, they all crumble, unable to withstand Laxman’s popularity, tenacity, dedication, and strategic branding.

The Indian cartoonist, whom the legendry British cartoonist David Low met in Mumbai, was unsparingly critical of his peers. “Chee [yuck]. You call him a cartoonist?” Laxman dismissed when I mentioned a popular cartoonist. That was a Laxman moment.

In 1947 a young Laxman found himself making cartoons on the Partition at the start of his career. “The Peace of Partition” and “Friendly Neighborhood”—on the Bhopal gas tragedy of 1984— are chilling.

It would be simplistic to interpret Laxman’s cartoons as either a defeatist sigh or a homeopathic balm for frayed nerves. On the contrary, his ritual exposé of modern governance questioned our imagined future and acche din.

Caricaturing Culture in India: Cartoons and History in the Modern World by Ritu Gairola Khanduri is available now in Hardback and Ebook (2014), and Paperback (2016).