Timothy Hellwig, the author of Globalization and Mass Politics, explores how globalization affects the world economy and perception of the economic crisis.

Globalization is a defining characteristic of our time. No longer limited to the behavior of activists and G8 meetings, it has been cited as cause for the rise of extremist political parties, declining participation in politics, and growing electoral volatility. Once embraced by some as a path toward growth, increasingly, a growing number evaluate increases in flows of goods, services, money, and people across borders in negative terms.  Today, many associate this shift with popular fallouts following the financial-cum-sovereign debt crisis, which began in 2007.  But even before the onset of the Great Recession, the public views on “globalization” had soured. And this was true not only for the globalization losers—i.e., those for whom globalization’s volatility increases the precariousness of their employment—but for the citizens of the rich democracies across the board.

Political scientists, economists, and sociologists have written a great deal about how globalization creates winners and losers.  At times, this dynamic is presented fairly benign terms. After all, addressing the inequities produced by changing circumstances—such as a rise in foreign investment or the loss of jobs overseas—is what social policy is for.  Public policy, that is, compensates the losers. The welfare state, however, does nothing to compensate citizens for globalization’s effect on how representative democracy works.  The association between economies that bleed across country borders and democratic political systems which are bounded by them is the basis for my new book, Globalization and Mass Politics: Retaining the Room to Maneuver (Cambridge, 2015).

I wrote the book to address what I thought was a great oversight in the study of how globalization matters in advanced capitalist economies; namely, the abundance of research on how internationalization constrains, redirects, or otherwise affects the policies governments enact and the absence of books on how this economic globalization affects how democracy works.  Interest among scholars with respect to policy outcomes, however, has come at the expense of understanding whether and how wide-ranging trends in the movement of goods, services, people and especially capital affect decisions of citizens, voters, and political parties—in short, the quality of electoral democracy. In order to investigate these issues, my book shines a light on globalization’s impact across a number of settings we find in democracies.  These include public demands for government policy action, for how voters assign responsibility and hold policymakers, the bases on which voters choose their representatives in democratic elections, and whether and how political parties respond in kind to changes in public opinion.  In doing so, Globalization and Mass Politics provides the first book-length treatment of first to offer up a comprehensive treatment of how country ties to the world economy matter for mass politics.

What do I find? Exposure to the world economy, I find, provides a rationale for believing your governments do less and, as such, are responsible for less, on economic matters. We see that in certain democracies with large domestic markets that politics is still mainly local (or national).  But in the more open economies—such as found in continental Europe—the masses see events through global lenses.  This is visible, for example, in comparing Americans’ and Germans’ beliefs about the economic downturn in 2009.  As the figure below shows, Germans were more apt to attribute the downturn to international bankers; Americans, on the other hand, were more likely to assign blame to their country’s policymakers.  Such differences in responsibility attributions reverberate throughout the settings comprising mass politics, from voters to parties.

Through a combination of cross-national and individual country analyses, my book reveals that by reducing the room in which to maneuver in policy making, globalization reduces the electoral salience of economic considerations while increasing the electoral importance of noneconomic issues. This has implications for how democracy works.  As Brian Burgoon has suggested, my book shows that globalization does not so much constrain democracy as transform it, shifting the locus of voter and policy maker contestation away from the economic-based issues that have defined the political divide in many countries and toward a politics based more on non-economic and cultural considerations. It is in these areas where policy makers retain the room to maneuver. 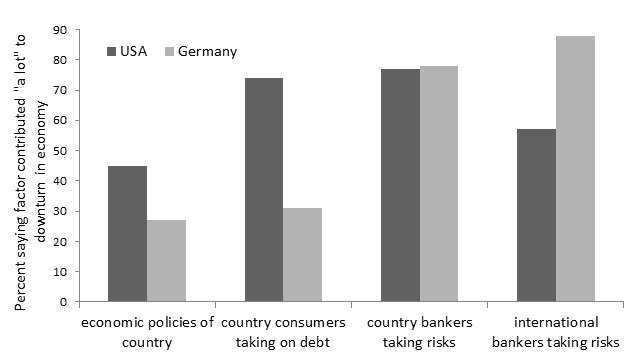 About the Author: Timothy Hellwig

Timothy Hellwig is the author of Globalization and Mass Politics....