Lawmaking in the New Nation

How the Aaron Burr trial changed law-making in America

The Burr treason trial offers a unique view of the law-making process—an opportunity enhanced by the extensive stenographic trial records, unparalleled newspaper coverage, and abundant personal recollections. While character and political ideology played a role, they operated within an intellectual framework created by the constitutional settlement of l787—and by four centuries of English law, which shaped arguments of counsel and Marshall’s decisions as well. If the collision of the English legal inheritance and the needs of the new republic constituted the matrix of American lawmaking, then the Burr trial is an ideal place to study the mix. 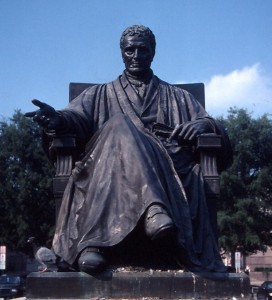 The separation-of-powers principle embodied in the Constitution, for example, was a salient factor throughout the trial—and never more so than when Marshall issued a subpoena duces tecum to Jefferson, ordering him to produce papers in his possession that Burr needed for his defense. Jefferson reluctantly delivered most of what Burr asked for, but he never conceded that he was constitutionally required to do so. Marshall’s refutation of Jefferson’s claim of executive privilege has echoed down the corridors of American history—never more tellingly than in U.S. v. Nixon (1974), when Chief Justice Burger ordered President Nixon to produce the famous tapes, and grounded the court’s decision on Marshall’s reasoning in U.S. v. Burr (1807). Due process of law backed by an independent judiciary was the high ground on which Marshall chose to fight; those principles are as relevant today as they were in l807.

Marshall made some law, but he did so in the process of granting Aaron Burr a fair trial. In making law, moreover, Marshall leaned heavily on the arguments of counsel—a fact that he acknowledged several times during the trial. The lawyers and the judge alike turned to English law for language and substance, as did the framers of the treason clause in the Constitution. When lawmakers in Richmond put their own imprint on the English inheritance, which they assuredly did, they presaged the time when American law would stand on native ground. The Burr trial was a telling moment in this transition.