Hello, Leiter Reports! I’m very glad that I have a couple philosophy degrees, because the conditional logic that you guys threw my way … well, wasn’t too complicated per se, I just don’t see much of it during a regular work day! That wasn’t supposed to rhyme. 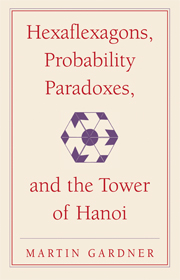 Anywho, I’m gonna pick THREE winners this week rather than one; because the response was so overwhelming, and I want to raise the chances for everyone. So I’ll announce the winners of Hexaflexagons, Probability Paradoxes, and the Tower of Hanoi.

If you don’t win, don’t fret! Along with the winners, I’ll post the next contest. Two more weeks to go.

There are three simple ways to do it, and you guys nailed them all.

Ask about the other guy: “If I were to ask a member of the other tribe the if this (pointing) road leads to the village, what would he say?”

The soul-searching method: “If I were to ask you if the road over there leads to the village, what would you say?”

The Biconditional (hey, I remember these): Warren C. Haggstrom of Ann Arbor suggested the following phrasing to Gardner (it’s in the book) to take the ambiguity out of questions within questions: “Of the two statements – ‘You are a liar’ and ‘This road leads to a village,’ is one, and only one of them true?”

I like Haggstrom’s language; it’s simpler than the “if and only if” conditional.

Check this out. In a 1957 letter to Scientific American, a couple of writers (one a Cambridge cosmologist) pointed out that you could know that two words, say, ‘pish’ and ‘tush’ mean yes and no, but not know which means which. Even so, given the liar/truth-tellers a crafty logician could ask:

‘”If I asked you whether the road I am pointing to is the road to the village, would you say pish?” If the response is “Pish,” then that’s the road to take. If “Tush,” take the other road.’

Though not categorically correct, I also would have accepted: “Did you know that they are serving free beer in the village?”

M. M. Smith with a nice little poem, Gathering for Gardner-style. He changed the logician to a young girl for clarity.

The lass questioned the teen on her plight
But feared he might lie by birthright
So she quizzed the youth’s ken:
“Would the other tribe’s men
Say to the left, or the right?”

The lass then took the other road.

Oh, man! A. Andrews managed to tie this one to our economic crisis:

There once was man from a U(niversity),
got stuck at a fork, what to do!?!
A truth-teller he sought, but discern he could not,
whether what he was saying was true.

He said to his new friend “Dear sir,
If an opponent you were (that is, a member of the other tribe),
Would you tell me to stay on branch B, or A?
Oh, and please do try not to slur.” (For the man from the University was old, and his hearing had declined).

“My friend,” said the native, “I know
that my opponent will tell you to go,
down this road right here, letter B, but I fear,
that with you this way I must go. (For the man’s sight had also declined, and this was apparent to the native).

But this quandary could not overcome
the mind of the man who was from
the University, for the answer, you see,
was clearer for him than for some.

He started down branch letter A
But why, you ask, did he stray,
from the path advised by the native disguised?
Since the native’s true tribe was still vague.

The answer will now be secured:
The question the prof asked ensured
that the native’s report, or his opponent’s retort
would certainly be a false word.

So along down branch A he went
Till every last dime he had spent
It was gone very fast, for no bill was passed,
that would, an economic crisis, prevent.

Winner #3, picked at random, was B. Bix. with an “Ask the other guy” method. There were some other memorable answers, some insightful, others, well, wrong, but good for a laugh. I’ll post them in the Hall of Fame page up top later today.

Thanks, Leiter readers, I knew I could count on you. Enter again!

And the next contest, after the jump. 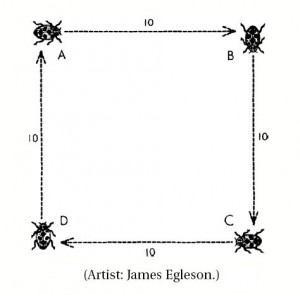 Four bugs, (A, B, C & D) occupy the corners of a square 10 inches on a side. A and C are male, B and D are female. Simultaneously, A crawls directly toward B, B toward C, C toward D, and D toward A.

If all four bugs crawl at the same constant rate, they will describe four congruent logarithmic spirals that meet at the center of the square.

How far does each bug travel before they meet? The problem can be solved without calculus.

Learn more about Gardner with the Don Albers interview.

Answer in the form below. Use “Gardner Week 5” in the subject line. Here are the rules. If you wish to send an attachment, please email it to:

Some of you have noted that this form has cut off after a line. I’m sorry if it gives any more trouble. If I get any answers that seem to do so, I’ll shoot you an email.

All information will remain confidential.