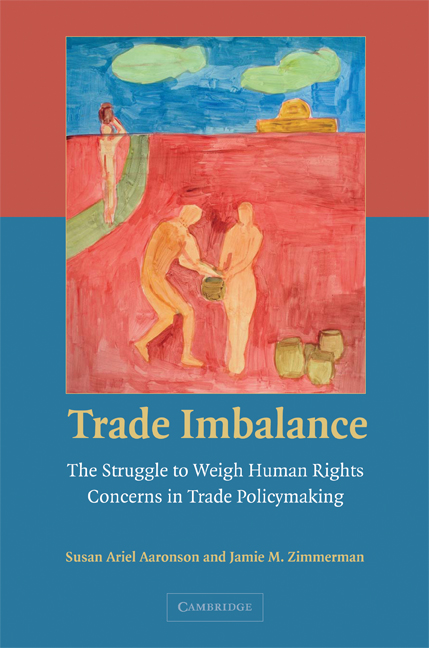 Susan Aaronson is co-author of Trade Imbalance: The Struggle to Weigh Human Rights in Trade Policymaking (2007). Aaronson is Research Associate Professor at the George Washington University Graduate School of Business and the Elliott School of International Affairs. She is also a Consultant to the Extractive Industries Transparency Initiative (EITI), a global initiative based in Norway, which helps citizens and policymakers in resource rich countries monitor and account for extractive industry revenues. Until July 2006, she was Senior Fellow and Director of Globalization Studies at the Kenan Institute, the Washington branch of the Kenan-Flagler Business School, University of North Carolina. (The Washington office is now closed) From 2001-2004, Aaronson devised and directed a major study, funded by the Ford, UN and Levi Strauss Foundations, that examined how U.S. public policies can promote or undermine global corporate social responsibility. The project resulted in three reports on CSR in international markets; on CSR and Trade; and on CSR in China. Aaronson is a frequent speaker on public understanding of globalization issues. She was a regular commentator on 'All Things Considered' in 1994–1995, 'Marketplace' from 1995-1998, and 'Morning Edition', 1998–2001. She has also appeared on CNN, the BBC, and PBS to discuss trade and globalization issues. She is the author of 6 books and numerous articles on trade, investment, business and human rights and other globalization issues.