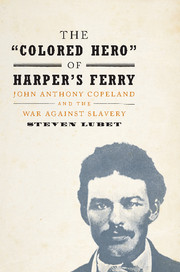 Steven Lubet is the author of The Coloured Hero of Harper's Ferry: John Anthony Copeland and the War Against Slavery (2015). He is a leading authority on African American resistance to slavery and notable trials in American history, Steven Lubet is the Edna B. and Ednyfed H. Williams Memorial Professor of Law at Northwestern University School of Law. He is the award-winning author of numerous books, including Murder in Tombstone: The Forgotten Trial of Wyatt Earp; Fugitive Justice: Runaways, Rescuers, and Slavery on Trial; and John Brown's Spy: The Adventurous Life and Tragic Confession of John E. Cook. Lubet has been an award-winning columnist for the American Lawyer Magazine, a commentator on NPR's Morning Edition, and the author of many op-ed pieces in national newspapers and on Slate and Salon.