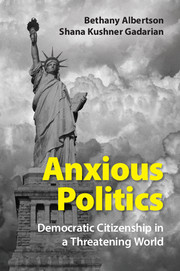 Shana Kushner Gardarian is co-author of Anxious Politics: Democratic Citizenship in a Threatening World (2015). She is an assistant professor of political science at the Maxwell School of Citizenship and Public Affairs, Syracuse University. She received a Ph.D. in Politics from Princeton University. Previously, she was a Robert Wood Johnson Scholar in Health Policy Research at the University of California-Berkeley. Her research has been funded by the National Science Foundation, Robert Wood Johnson Foundation, Campbell Public Affairs Institute, and the Bobst Center for Peace and Justice. Her work has been published in the American Journal of Political Science, Journal of Politics, Political Psychology, Political Communication, Perspectives on Politics, and volumes on experimental methods and political psychology.