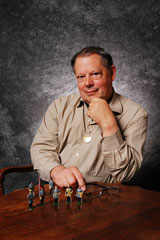 Roger L. Ransom is Distinguished Professor of History and Economics, Emeritus at the University of California, Riverside. He is best known for his work with Richard Sutch on the American Civil War and his many publications include the books One Kind of Freedom (co-authored with Richard Sutch Cambridge, 2001), Conflict and Compromise (Cambridge, 1990) and The Confederate States of America: What Might Have Been (2005). He was the president of the Economic History Association in 2005, and was awarded a Guggenheim Fellowship, and the distinguished teaching award from the University of California, Riverside. He also won the Arthur H. Cole Prize from the Economic History Association and the Clio Can Award from the Cliometric Society.