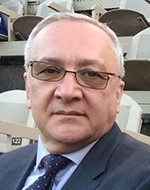 Nikolai Bagdassarov is a professor in the Department of Earth Sciences at Goethe University, Germany. He is a fellow of the Humboldt Foundation, Head of the Rock Physics Laboratory and Professor of Geophysics at Frankfurt University, and has been a member of the American Geophysical Union since 1991. He has more than sixty peer-reviewed publications in the field of rock physics and is an experienced lecturer, having taught courses on geophysics and rock physics, physics of magmas and volcanoes, and rock mechanics at Goethe University Frankfurt since 1995.