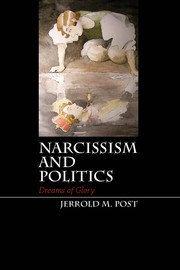 Dr. Jerrold M. Post is author of Narcissism and Politics (2015). He is Professor of Psychiatry, Political Psychology and International Affairs and director of the Political Psychology Program at The George Washington University. Dr. Post previously worked with the Central Intelligence Agency, where he was the founding director of the Center for the Analysis of Personality and Political Behavior. He played the lead role in developing the Camp David profiles of Menachem Begin and Anwar Sadat for President Jimmy Carter and initiated the U.S. government program for the study of the psychology of terrorism. In recognition of his leadership at the center, Dr. Post was awarded the Intelligence Medal of Merit in 1979. He received the Nevitt Sanford Award from the International Society of Political Psychology in 2002 for distinguished professional contributions to political psychology. He has testified before the Senate and the House on his political psychology profile of Saddam Hussein and on the psychology of terrorism, and he has presented to the UN International Atomic Energy Agency on the psychology of weapons-of-mass-destruction terrorism. He is a member of the National Academy of Sciences' Committee on Deterrence in the 21st Century.