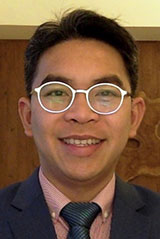 Jayson S. Lamchek has worked as an attorney for civil society organisations in the Philippines for more than seven years, including the Public Interest Law Center which supported the peace negotiations between the Philippine government and the National Democratic Front of the Philippines. During his work at PILC, he helped campaign against the War on Terror in the Philippines, and represented individuals wrongly accused of participation in terrorism. He was a recipient of graduate scholarship awards from Monbukagakusho (Japan), Erasmus Mundus (European Commission), and the Endeavour Awards (Australia).