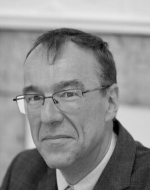 Chris Morash MRIA, FTCD, is the inaugural Seamus Heaney Professor of Irish Writing at Trinity College, Dublin; he was Vice-Provost of the university from 2016-2019. He has published widely on Irish literature and culture, including A History of Irish Theatre 1601-2000 (2002) which won the Theatre Book Prize, A History of the Media in Ireland (2009) and Mapping Irish Theatre: Theories of Space and Place (2013, with Shaun Richards), all published by Cambridge University Press. He is currently Series Editor for the Writers’ City series.