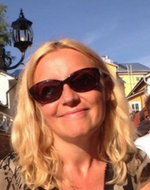 Caterina A. M. La Porta author of The Physics of Cancer 2017, is Associate Professor of General Pathology at Università degli Studi di Milano and group leader of the Molecular Oncology Laboratory there. In 2015, she founded the university's Center for Complexity and Biosystems. She has organized several interdisciplinary workshops on the physics of cancer funded by the European Center for Atomic and Molecular Calculations (CECAM) and the European Science Foundation (ESF).