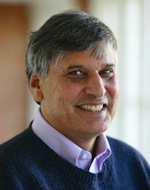 Brian Balogh is author of A Government Out of Sight: The Mystery of National Authority in Nineteenth-Century America (2009) and Chain Reaction: Expert Debate and Public Participation in American Commercial Nuclear Power 1945–1975 (1993). Balogh is an associate professor in the Department of History at the University of Virginia and Chair of the Governing America in a Global Era Program at the Miller Center of Public Affairs. He is author and editor of several books and has published articles and essays about Progressive Era politics, the link between interest groups and public policy, and the legacy of Vietnam - some of which have appeared in the Journal of Policy History, Studies in American Political Development, and Social Science History and Environmental History. He also serves on the editorial boards of the Journal of Policy History and Studies in American Political Development. Balogh is a frequent commentator on politics in the national media. He co-hosts a radio show, Backstory with the American History Guys, that is carried on several NPR-affiliated stations. Before receiving his Ph.D. in history at The Johns Hopkins University, Balogh ran several welfare programs for the City of New York and was an adviser to New York City Council President Carol Bellamy.