The new (constitutional) clothes of the European Central Bank will be revealed as the inflation tide is turning – is it swimming naked? 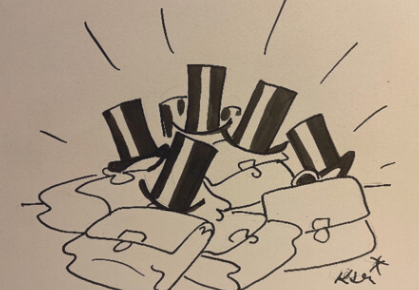 Warren Buffet famously remarked: ‘only when the tide goes out do you discover who’s been swimming naked’. Given his success with a common-sensical and longer-term perspective on money and investing, his quote can be painfully timely with regard to central banks. For more than a decade, we have witnessed central banks embarking on many experiments mainly to support the economy and markets. Most importantly, they have created historical amounts of central bank money to buy government bonds, officially mainly to avoid deflation getting hold of economies. Now that the inflation tide is turning, we will find out who has maintained a successful longer-term perspective. A central bank is swimming naked, if it is caught with limited means to control inflation, basically because it has over-utilized its instruments for other purposes.

This is the time to take a longer-term perspective on central banking, as should also be the central bank perspective on the economy. That is the aim of my new book The European Central Bank and the European Macroeconomic Constitution – From Ensuring Stability to Fighting Crises (CUP): how is this special central back and a special currency was supposed to work. That had puzzled me already when I was working at the ECB as a young economist, designing the framework for the new currency. And It became an even more complicated question, when the various and unanticipated crisis have hit the euro area, and the ECB was called upon to use it firepower in many unforeseen and also controversial ways.

These principles were largely followed during the first decade of the euro, but the second decade was very different. The ECB found itself at the heart of the action when various crises hit the economy. It even became the fire brigade of the euro area. More often than not, the solution to problems involved the creation of central bank money, either to fight fiscal crisis or financial instability or Covid-19. This has arguably burdened the ultimate tool of the central bank, the monopoly issuance of central bank money to an unforeseen extent.

Now, it seems that we have entered a new phase in this progression, when inflation is rising and the public is asking, how the central banks will ensure the purchasing power of money.

In a way, due to its design as a constitutional central bank with the primary – or even a sole objective of price stability, the ECB should be in a great position to convince the public that it will tame inflation. It was born for this task. Unfortunately, things have become more complicated on the way. With its new activities, I argue, the ECB is involved in many areas, ensuring public finances of some Member States, ensuring financial stability and even fighting climate change. These other activities might have made a good company to monetary policy of ensuring price stability, when deflation was perceived the main threat. But now, as the ECB needs to get inflation under check and regain the public trust in ensuring euro’s purchasing power, the legacy of other activities could a major obstacle.

What is at stake here? Basically, the whole, both economic and constitutional model of the euro currency. In particular, through its quantitative easing the ECB is the main owner of government bonds in all the Member States. We don’t know what would happen if the ECB (or other central banks) started to sell their massive government bond holdings in a major scale. We know that previous yields were mainly defined by central bank purchases, but how much would a reversal in purchases affect the yields in the most vulnerable countries? This will make the ECB’s task extremely complicated, borderline impossible. At the same time, it cannot stand still and lose the public trust in its task of ensuring price stability. That would be swimming without (constitutional) clothes; not be only embarrassing but also fatal. Perhaps a possibility still exists for the ECB is to embrace its constitutional model, and scale down its other activities. Time will tell.

About the Author: Klaus Tuori

Klaus Tuori is a research fellow at the University of Luxembourg. He is one of the leading scholars of the EU economic-constitutional model, whose multidisciplinary approach and understanding stems from his work as a central bank economist at the European Central Bank and financial markets. He is the co-author of The Eurozone Crisis: A Constitution...