Look out! Here comes the Catastrophocene… 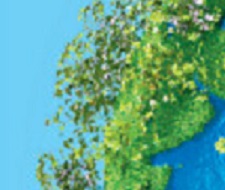 The good news is that the Anthropocene is almost over. It may have been the shortest geological epoch in all of Earth history. The bad news is that the Catastrophocene is just beginning.
This is a period marked by the interaction of ten catastrophic risks which many scientists are now warning us could precipitate the end of human civilisation – and potentially bring about the premature departure of our species from an uninhabitable Earth.

The Holocene, the climatically stable period which enabled humans to develop agriculture and cities, is now over. It lasted about 11,650 years, from the last Ice Age to the mid C20th. And now it is gone, and we are into a wholly different world, named in 2000 by Dutch Nobel laureate Paul Crutzen ‘the Anthropocene’ – the epoch in which humans became a truly geological force, reshaping and altering the entire planet, its atmosphere, oceans, the land, and life itself. On present indications, the Anthropocene will last only a century or two.

The evidence now indicates we’re into something altogether more grim. Each day brings fresh reports of the colossal unintended consequences of human activity around the planet – vast floods, tens of thousands of fires raging, dust storms sweeping topsoil off farms, heatwaves, dried-up rivers and lakes, melting glaciers, unimaginable losses of birds, animals, insects and other life, dwindling forests and fish, poisoned water, oceans, food and air, declining oxygen levels, hunger and starvation, the dissemination of diseases previously unknown, the mass migration of 350 million people a year, the advent of potent new technologies whose effects are unknown and uncontrolled, and the insidious worldwide seep of malicious lies about it all.

These phenomena are the physical manifestations of the human existential emergency, the greatest threat in our entire history, which I describe in a new book by Cambridge University Press How to Fix A Broken Planet: Advice for Surviving the 21st Century.

This is a crisis which many scientists and individual citizens now recognize as real and imminent – but which most governments, corporates and politicians seem loath to accept on the evidence that is before their very eyes.

The book describes the crisis as comprised of ten catastrophic risks – not just the one or two most commonly reported in the media. All these risks interact with one another, meaning they cannot be tackled separately or solved one by one. Collectively, they are driven by human overpopulation, overconsumption and overpollution. The risks are:

Extinction and eco-collapse: currently proceeding 1000-10,000 times faster than normal, eliminating the ecosystems that humans and wildlife need to survive. Mainly caused by agriculture and land development.

Overheating: a climate approaching out-of-control as nine huge ‘feedbacks’ from the Earth system itself make it even faster, hotter and more turbulent than man-made factors (like fossil fuels and land clearing) alone.

Global poisoning: currently killing 14 million people a year, this is five times larger and ten times more deadly even that climate change. Human chemical emissions are the largest and most underestimated threat to planetary health and survival.

Nuclear holocaust: with 70 nations still committed to nuclear arms and conflict, scientists currently rate the threat at ‘100 seconds to midnight’, the worst level since Hiroshima.

Resource scarcity: a world water crisis is already a reality for half the world’s population. Loss of topsoil, forests, fish stocks and scarcity of other key resources threaten to unleash fresh conflicts and more destruction.

Pandemics: there have been seven pandemics since 2000, with a new one striking every 2-3 years. With some 90 wild animal diseases already crossed into humans, more are on the way.

Overpopulation: we hit 8 billion in November 2022 and are on track for 10 billion by the 2050s, human numbers are estimated to now be 4-5 times what the Earth can carry in the long run. Population pressure drives all the other mega threats and must be brought under control.

Famine and hunger: already rising due to loss of soil, water and a stable climate. World food chains increasingly vulnerable to disruption from shortages, conflict and big events, putting megacities at risk.

Ultratechnologies: uncontrolled development and release of powerful new technologies without thought for the consequences will unlock fresh crises for humanity, just as fossil fuels and chemistry already have.

Misinformation: the world is drowning in lies, half-truths and disinformation, mainly spread by the fossil fuels lobby, certain media, politicians and other malicious actors. These are disabling government, breeding mistrust of science and making the task of saving civilisation ever harder.

It is the interaction of these ten mega-threats which now constitutes a new age for humanity described in How to Fix a Broken Planet. The ‘Catastrophocene’ will be a period in which most human lives will be consumed in attempting merely to survive and find workable collective solutions to these threats, to repair our damaged planet and salvage all that is good and decent of our civilisation.

Take heart, solutions do exist. They are detailed in every chapter of the book – both global answers and what individuals can do in their own lives to help themselves and defend the Habitable Earth. They are all based on science, and on the best advice from our wisest minds globally.

However, as the Council for the Human Future has noted: no government on Earth yet has a policy for human survival. They simply do not grasp the magnitude or the reality of what is unfolding. Or maybe they just don’t care. Nor do the giant corporations who now rule the world economically.

Doing nothing, or doing too little too late, will destroy us.

Part of that consists in reducing both our numbers and our material demands to what the planet can safely bear in the long term. If we do not undertake this task, then nature will surely do it for us. Doing nothing, or doing too little too late, will destroy us.

In other words, controlling the catastrophic risks we now face can save countless lives, help avoid total collapse or even extinction, restore the Earth and preserve what is best about the human endeavor. The book calls for, and provides the basis of, a world plan of action for human survival.

As ‘How to Fix a Broken Planet’ makes clear, this is the greatest, noblest and most urgent cause in all humanity’s million-year journey on this Earth.