The Great Plague Scare of 1720: Disaster and Society in the Eighteenth-Century World 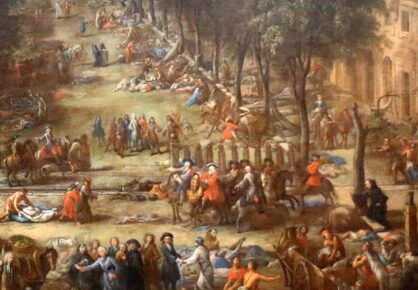 On May 12, 1720, health officials in Marseille wrote the gouverneur of the region of Provence in Paris requesting to expedite the construction of a new building for the local Bureau de la santé or Health Board. The structure that had stood there since 1660 was a bureau flotant—literally a floating office—that stood on the water at the entryway to the port of Marseille. They explained that the building was “entierement pourry,” entirely rotten, and that they were sometimes forced to postpone their assemblies lest they run the risk of being completely submerged. For this reason, the intendants wished to work with the certainty that the completion of their new bureau was underway, for there was word that plague was raging in Palestine and Syria.[1] Given their perceived urgency of the situation in the Levant, they explained that their meetings would need to occur more frequently, so they could more effectively prevent the disorders that could ensue upon an outbreak of contagion. Less than two weeks later, plague appeared in the port of Marseille, reportedly arriving aboard a vessel named the Grand Saint-Antoine. It was to rage for two and a half years and take over 100,000 lives in the region of Provence and parts of Languedoc.

Marseille’s history as a port of entry for contagion is well known, as is the story of this epidemic—the last major wave of bubonic plague to strike the city and surrounding areas. What is not well known is the impact that the Plague of Provence (also known as the Plague of Marseille) had beyond French borders. To be clear, the infection never left southeastern France, yet all of Europe, the Mediterranean, the Atlantic, and parts of Asia (including the Spanish Philippines) mobilized against its threat, and experienced its social, commercial, and diplomatic repercussions.

Accordingly, rather than discuss only what took place in France, my book, The Great Plague Scare of 1720, looks across national boundaries to identify and analyze the ramifications of the outbreak beyond French borders. It is a transnational, transoceanic history that looks at some of the foremost port towns of the early modern world in order to begin to shed light on the influence of this event abroad. Cities explored in the book include Genoa, London, and Cádiz—the official capital for the Spanish monopoly over the Indies market, and thus eighteenth-century Spain’s most important seaport—as well as some of the principal colonial ports in the Americas. These ports were not only major hubs for commercial activity in the first half of the eighteenth century but also shared inextricably close links with one another.

Proceeding in order of distance from the hot zone of Provence, each chapter in the book focuses on a different port city or region. Taken together, they cover the years from the 1713 Peace of Utrecht through roughly 1750—a traditionally understudied period of the eighteenth century, since the great majority of historical literature typically ends in 1720 or begins with the Seven Years’ War. Fundamentally, however, this book explores a moment in history; the Plague of Provence is representative of important shifts that were taking place by the eighteenth century both in approaches to the handling of disease and disasters and in the ways in which these were understood.

The so-called Scientific Revolution and Enlightenment Era had ushered in new empirical and mechanistic ways of understanding the environment, slowly moving away from strictly religious or astrological explanations. These earlier epistemological developments laid the groundwork for an outpouring in 1720 of writings and debates, inspired by the outbreak in France, that sought to explain the nature of contagion in new, more rational ways.

The 1720 plague also marked a major shift in parts of Europe from local- or municipal-level disaster management toward what I call “disaster centralism,” or the centralization of disaster and crisis management that developed, most notably, in the eighteenth century. This premise forms the central argument in this book. Prior to the Plague of Provence, crisis management took place primarily at the municipal or local level, with few, if any, expectations on the part of the people for the government in a far-flung capital to step in and offer relief. This began to change over the seventeenth century, and the Provençal plague represented the first, most prominent opportunity to advance the power of the state in the name of public health. At this time, the monarchs of Western Europe’s emerging nation states—including France, Great Britain, and Spain—all ruling from a recognized capital, stepped in to manage the crisis, at once replacing the authority of local officials.

In the eighteenth century as today, disasters served as tools of statecraft, and proved useful to the centralizing state. In 1720, it was the Crown—in Paris, Madrid, London, and beyond—that called for measures to prevent the spread of the Provençal plague into their own regions. Some of the measures enacted at this time from the capitals of these kingdoms included (but were not limited to): amplified surveillance and police presence in ports and along borders; the enactment of controversial vessel searches and quarantines, and directions for carrying them out; the restriction or prohibition of movement across borders or in areas suspected of infection and the use of health certificates; the establishment of military cordons; the deployment to the provinces of royal representatives charged with reporting back to the Crown; and, notably, the founding of centralized public health agencies that remain to this day (albeit under new structures and with new names).

Focusing on this one major crisis allowed me to explore these developments, and to identify—based on research in more than 20 archives across western Europe—the numerous ways in which a disaster in one place has the potential to influence society, politics, the economy, and/or the environment across the globe.

A study like this, which seeks to elucidate how disasters were managed and understood in the eighteenth century—when society was undergoing such dramatic social, political, and intellectual transformations—can be instructive for us today as we grapple with the challenges of climate change and increasingly frequent disasters, including global pandemics, in similarly transformative times.

About the Author: Cindy Ermus

Cindy Ermus is Assistant Professor of History at the University of Texas at San Antonio....